Hiking vs climb a mountain

I was suggested using the term "hiking" instead of "go climb a mountain" when trying to describe a tour in which we go to a mountain and climb up for exercises.

As I understand, hiking is the activity of taking long walks.

what term can be used to serve as the sense, where you go on a travel to climb a mountain for fun/exercises?

I upvoted your question because it provides a good example of how words can have overlapping meanings, and we must rely on context to determine which meaning is intended.

As I type this now, a couple people have already left feedback saying that climb implies specialized equipment and technical difficulty, while hike implies a more relaxed amble. While this distinction isn't wrong, I feel like it also oversimplifies your problem and fails to give your question the detailed answer it deserves.

Most words in English have multiple meanings and nuances, and can be adapted to various uses. While it's true that climb can imply using your hands or special ropes and belaying equipment, that isn't always the case. For example, when Doyle wrote in one of his Sherlock Holmes stories, "Gregson climbed the stair to arrest this desperate murderer," no one imagines Gregson using ropes, special boots, or safety harnesses. And when a news article says, "Byrd recalled trekking through western China on the way to hike K2," we don't expect to read about a walk in the park by someone carrying little more than a water bottle and some trail mix.

In the context of mountaineering, both hike and climb can be used to describe either perilous ascents or upward recreational strolls. My daughter enjoys rock climbing as a hobby, but I can still find plenty of images like this one on Google using terms such as "hike up the ridge". 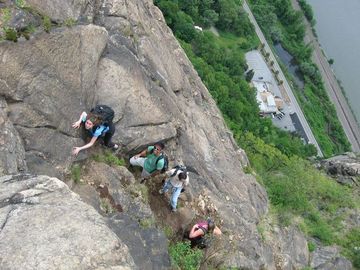 If you are trying to make sure the listener understands you are going up a mountain for fun or exercise, I don't think choosing the "right" word between hike and climb is a surefire way to do the trick, as either word can be used for that purpose. It would be pedantic to correct someone and say, "You shouldn't have said climb; you should have said hike," and such talk wouldn't win you many points among a community of outdoor recreation enthusiasts.

That all said, Wikipedia has some interesting notes about verbiage that might be useful:

In the United States, Canada, the Republic of Ireland, and United Kingdom, hiking means walking outdoors on a trail, or off trail, for recreational purposes. A day hike refers to a hike that can be completed in a single day. However, in the United Kingdom, the word walking is also used, as well as rambling, while walking in mountainous areas is called hillwalking. In Northern England, Including the Lake District and Yorkshire Dales, fellwalking describes hill or mountain walks, as fell is the common word for both features there.

Hiking sometimes involves bushwhacking and is sometimes referred to as such. This specifically refers to difficult walking through dense forest, undergrowth, or bushes, where forward progress requires pushing vegetation aside. In extreme cases of bushwhacking, where the vegetation is so dense that human passage is impeded, a machete is used to clear a pathway. The Australian term bushwalking refers to both on and off-trail hiking. Common terms for hiking used by New Zealanders are tramping (particularly for overnight and longer trips), walking or bushwalking. Trekking is the preferred word used to describe multi-day hiking in the mountainous regions of India, Pakistan, Nepal, North America, South America, Iran and in the highlands of East Africa. Hiking a long-distance trail from end-to-end is also referred to as trekking and as thru-hiking in some places. In North America, multi-day hikes, usually with camping, are referred to as backpacking.

If you just had a tour you could say, "to take a tour to (into) the mountains (mountain side)"

-3
meanings of mountain climbing and mountaineering

2
A term used to describe “likewise” treatment in politics
3
If 'get ready' is not proper here, what should it be?
3
What is the term used for adding an 's onto a name?
1
Does “improved visual skills” equate with “better eyesight”?
4
What's the word to specify a certain longitudinal position in a long street or park?
2
Is 'vertex' the correct term for peak (and valley) point on a curve?
1
Can the word `task` on its own be used to refer to a physical place (e.g. short for `task surface`)?
4
What does “jumper” mean in this sentence?