What does "something are down" mean?

I saw this picture on the Net... 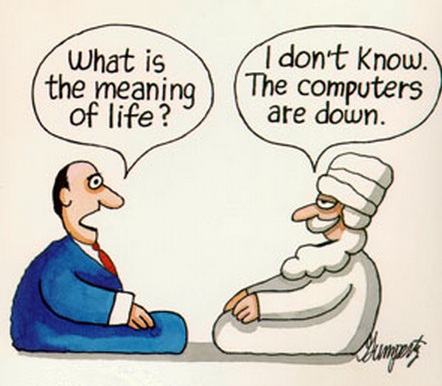 What does "The computers are down" mean? Thanks.

Literally, "computers are down" means that those computers are off-line, usually because of some kinds of problems (such as power failure, software failure, operating system crash, etc.).

I don't know if there are any deeper meaning. But it seems to me that the comic hints that people nowadays rely too much on computers. Even a guru still needs computers to provide a good answer. (In this case, "the meaning of life".)

PS. This reminds me of a novel by Douglas Adams, Hitchhiker's Guide to the Galaxy. In order to get "the answer to life, the universe, and everything", a supreme being had to create a computer to provide such an answer. After a long time past, the computer gave the answer, 42. (The computer that was created in the story was actually our Earth, including us human beings.)