This is so common but then I never thought too deep unless I became a fan of English language after joining this site!

Okay, while doing thumb(s)-up, you don't do it with both the thumbs but with one. So, it's actually thumb's up!

I searched a bit more and found some interesting information which might give us some clues why we use "thumbs up" (with an 's'), not "thumb up".

Gestures: Their Origin and Meanings, who uses the term The Thumb Up in the article and also provides a few images that clearly shows "The Thumb Up", seems to suggest that the term was originally used in Rome, but it seems to signal death, e.g.

Dixon, 1896: 'To turn the thumbs up. To decide against. The Romans in the amphitheatre turned their thumbs up when a combatant was not to be spared.'

So according to such use, the "thumbs" should refer to those thumbs of people who are in the amphitheater.

However, this is not the only theory for this "thumbs up" gesture. You can find many proposed theories of its origin in Wikipedia, which states "The source of the gesture is obscure, but a number of origins have been proposed."

For example, this web page says,

The thumbs up sign is most commonly (but wrongly) thought to descend from gladiatorial contests in which the audience determined whether the combatant was eligible to live or die by a thumbs up/ thumbs down vote. But there are other theories. There is a old English saying ‘Here’s my thumb on it!’ which was used to seal a bargain. The two people involved each wetted a thumb and then extended it, held upwards, until the two raised thumbs came into contact with one another. It is easy to see how this custom could lead to, or support the idea of holding out a raised thumb as a sign of friendly agreement or approval. The signal has also been used by some ape species, who may just be celebrating the fact that they, like we, have opposable thumbs in the first place.

Again, it seems that there are more than one person involved in the act up this use of "thumbs up".

Considering these two convincing alternatives of thumbs up's origin, it's quite plausible that it was originated with the plural thumbs indeed.

(One) thumb up (used as a gesture) = you are generally showing your approval; you are expressing happiness or wishing someone good luck.

(Two) thumbs-up (as in the expression) = an agreement or approval; or a great success; or even a manifestation of one's happiness.

a reaction that shows you like something such as a plan or idea, or that you will accept it

Note that many online dictionaries spell thumbs-up with the hyphen. This is something I hadn't noticed until I began researching. Hyphens are normally used in compound nouns and verbs, but nowadays the trend seems to be declining and many will either leave spaces or combine the two or more words into one word.

Thumbs up is therefore a compound noun, and as a result you can use it with the indefinite article. It looks plural but the meaning is singular. It means a strong and (sometimes) very enthusiastic approval.

There is also the idiom; (give a) thumbs up to somebody or something

to show approval of or support for someone or something "Voters gave a thumbs up to building swimming pool for the town". Usage notes: often used in the form give the thumbs up (to something): "We have been given the thumbs up and will begin work next week". 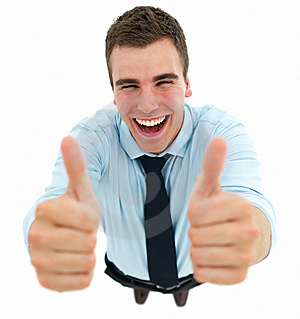 My assistant gave me the thumbs up, indicating success.

= My assistant gave me the well-known two thumbs up gesture, indicating success.

Several spectators gave me a thumbs up as I tore through the finish line tape in first place.

= Several spectators gave me an instance of the two thumbs up gesture.

The difference between "a" and "the" is basically the class/instance distinction. "The thumbs up" means we are taking the point of view that this gesture exists as a single abstraction only: there is only one thumbs up in the world, and if we see two people at two different time and places give us "the thumbs up", it is the same entity showing up in two places. "A thumbs up" refers to the manifestation, where the point of view is to regard each one as a separate instance.

I received probably more than fifty thumbs up from passers by outside city hall, when I protested the closure of Jenkins Memorial hospital.

= The viewpoint that these are instances that can be treated as separate and counted.

Fifty people gave me the thumbs up.

= The viewpoint that this is one abstract thing, like "encouragement" or "support". Fifty people gave me one thing.

Interestingly, we cannot regard, say, "smile" as a class in this way:

Ah, but no: indeed we can. But the nuance is that this is some special kind of smile.

A: Three girls gave me the smile today, man!

B: Dude, what are you talking about. What do you mean "the smile"?

B: Oh, the smile. You devil, you! Did you get their phone numbers?

The ancient Romans used a thumb in gladiator matches. It was used as a signal to spare or to kill a defeated gladiator.

It is worth noting that there are funerary sculptures from the Minoans (preceding the Romans and the Greeks) using that signal (though a thumb down signal apparently was a good thing).

Not the answer you're looking for? Browse other questions tagged word-usage idioms nouns or ask your own question.