What are these symbols and abbreviations "CP, IP, Ti, Ap" called?

I want to know what are these abbreviations existed in the picture referring to, and want their names to read about?

These are the names of standard constituents in X' (X-bar) notation:

I have no idea why Mary isn't labeled as an NP (which is sort of like a Noun Phrase except different). Perhaps your source is stripping out labels that don't bear on whatever point is being treated immediately.

The bracket notation is a space-saving way of recording syntactic structure; you can plug it into a tree drawer (without the duplicate ti)and get this: 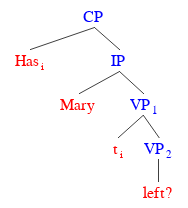 Scores of books have been written about this approach to syntactic analysis; if it interests you there are very good sites

Not the answer you're looking for? Browse other questions tagged syntax terminology or ask your own question.

4
What is the difference between curly braces and curly brackets?
33
What is the name for these keys on a computer keyboard?
0
What is the name of the structure and the components of such words?
0
What are phrases with these forms called?: being + adjective; preposition + being + adjective
1
What exactly are 'discourse linkers'?
2
What are the combinations of "there-is" or "there-are" called in English grammar terms?
1
What are these lines depicting movement in a cartoon called?
0
Are these rules, principles or something else?
1
What is this writing technique called in English?