What do I call this food? 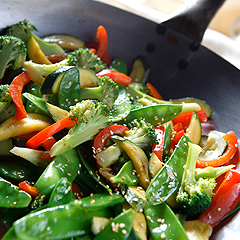 For stir fry, I'm not sure how to write "stir fry" in past tense and continuous tense. Can I say these?

Stir fry (or stir-fry) can be used as a noun, for dishes which have been prepared with that method, as in

Chinese stir fry is also commonly heard, as the term originated in a Chinese cookbook; the Western counterpart to stir-fry is sauté.

To say vegetable stir-fry is to describe a particular dish, i.e. a stir-fry that has been prepared entirely with vegetables, as opposed to a chicken stir-fry or pork stir-fry for example. In contrast, vegetarian stir-fry describes a stir-fry which is vegetarian— unless it is made from vegetarians, I suppose.

When cooking for themselves, I don't think most people would refer to any dish as a combination, unless citing the title of a particular recipe. That term is associated with discounted options at inexpensive restaurants and fast food joints.

Stir fry can also be used as a compound verb, which you can use as you have proposed.

He stir-fries vegetables and tofu for supper every day.

I'm stir-frying the vegetables so they'll be crispy.

You can also use its past participle (adjectival) form to describe food that has been so prepared.

You made stir-fried vegetables again?

Not the answer you're looking for? Browse other questions tagged word-request image-identification food .

2
What do I call these things in English?
5
What do we call this? Tea cup circles?
2
Pounded potatoes, Grounded or Mashed potatoes?
4
what shape are french fries?
3
Term for this kind of door
0
Is this dish (or vessel) called "casserole"?
0
What are the names for physical compounds of letters?
0
How do you call the person working in the local government office?
0
What do you call information obtained from an impartial source?
0
What do you call these little bits of the sky you see through a forest?