On instagram there is this piece about John Michel Basquiat.

It says "He got his start painting grafitti on the D train".

What does D train mean?

In some cities, routes on the mass transit system are identified using letters and/or numbers. New York is an example of this (you can see the map here), and is likely the system that was referred to, as Basquiat comes from New York. The normal usage in New York is to call a subway route by its letter or number, followed by the word train rather than route, so one thus refers to the D train instead of route D.

It means a train line identified by the letter D, specifically the D Line of the Metropolitan Transit Agency of New York City, where Basquiat lived: 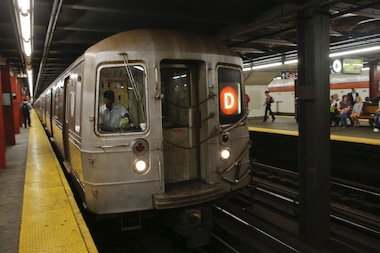 2
What's the meaning of “I'd say”?
3
What does further up the train mean?
2
Meaning of the clause 'Opening the file, he called John'?
7
Does “an oil painting” have some slang meaning?
0
Trying to understand small text from novel dracula?
1
Meaning of being stoked?
25
Unusual meaning of “wet”
0
The meaning of 'changing fortunes'
3
Meaning of “she's got her head in the right place”
0
What does it mean, “teeth, tits and tan”?