Can a conjunction be the object of the second clause?

Can a conjunction be the object of the second clause? Example: Do it wherever you are

here "wherever" acts as a conjunction and it is the object of the second clause? Am I right?

Do it wherever you are. 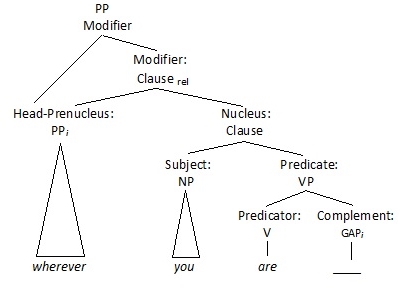 The expression "wherever you are" is a PP (preposition phrase) functioning as an adjunct (a modifier) in the structure of the sentence, which here is of a special kind called a 'fused relative construction'.

Within the PP, the complement of "are" is a locative complement (marked by 'gap') which is cross-indexed with 'i ' to the head "wherever", called the prenucleus.

Wherever is neither a conjunction nor an object.

The clause wherever you are is a fused relative clause acting as a locative adjunct—an adverbial—to the main clause Do it.

Syntactically wherever is a relativizer signalling a 'gap'—a missing constituent in the clause, to be 'filled in' by the hearer.

Semantically, wherever is a 'pro-form' standing for a locative preposition phrase in the same way that a pronoun stands for a noun phrase. It's roughly equivalent to (at) whatever place, with the determinative whatever fused with an implicit locative nominal.

Whatever implies then a locative preposition phrase in the gap (marked above by _), which in that clause would be a predicative complement:

Conjunctions cannot be objects. Objects have to be nouns or noun phrases.

There are words that are somewhat conjunctions and somewhat pronouns - these are relative pronouns.

I want to know which one do you want.

Wherever is not a relative pronoun but where can be ...

I looked where he told me to.

Because wherever doesn't have a linking function, a that can appear there (often elided) if wherever is used, but not where:

I looked wherever [that] he told me to.

I looked where that he told me to (doesn't work).

2
noun clause & attributive clause
4
Is even a preposition/conjunction?
3
Does "complement clause" exist?
0
Can I put two dependent sentences into one subordinating conjunction?
1
Is the second clause defining or non-defining clause?
0
Can a pronoun represent a noun first appearing in a relative clause or first appearing as an object?
0
Noun clause or adverbial clause?