How can I differentiate peppers?

I know this question sounds strange, but when I see green pepper in a menu, I don't know which one it is. Any way I can distinguish them? (I know the last one is referred to as hot, but that doesn't always help.) 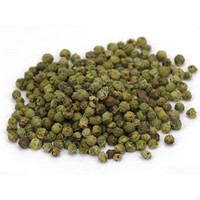 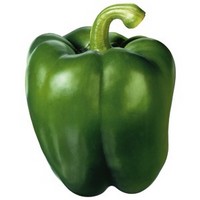 The phrase "green pepper" always refers to type (2). It is the name of this type of pepper (in the same way that "bluebird" is the name of a specific species of bird.)

Type (1) looks like (the mass noun) pepper, where this particular instance happens to be green. A menu should never use "green pepper" to refer to this, because it will confuse the customers.

Type (3) looks like a hot pepper of some sort. I can't identify the species. It would be called a pepper, but never a "green pepper." If the listener was confused, I might say, "I have a pepper. It happens to be green. It is not a green pepper."

"I like my eggs with peppers." (I want my eggs mixed together with a sliced up version of (2) or (3) or maybe some other type of pepper.)

For the record, I personally don't like item (2) and was disappointed once when I ordered "pepper steak" from a Chinese restaurant. I expected a steak covered in item (1). What I got was sliced steak cooked with item (2). I think that dish should instead have been called "steak with peppers" or "steak with green peppers."

For number 3, you can refer to it as a green chilli. The word pepper, is not necessary when talking about it. If you must use it, you can call it a green chilli pepper.

6
What is this food called in English?
1
(Bell pepper, capsicum, chilli, pepper) What's the difference?
-1
Usage of “paprika” and “bell pepper”

13
Does “hardly” have a unified meaning?
4
Expression to differentiate between listening problem and understanding problem?
0
Describing Pain during Movement
1
hot vs. pungent vs. piquant vs. spicy
2
“Can you see it?” vs “Do you see it?”
0
Do we like things better or more?
2
Seemingly vs. apparently
0
When to use “find” & when to use “look for”?
1
Would or Will or the Present tense
1
“Hopeful”, “Promising” and “Hope-giving”