Meaning of the dialog 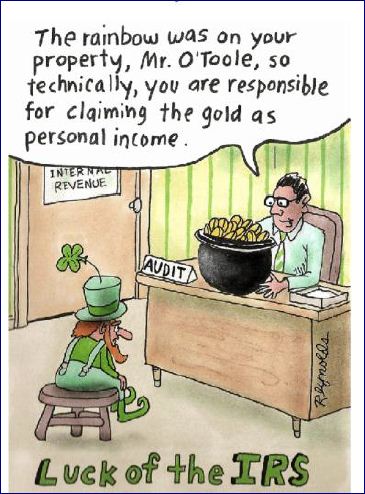 What does the Audit manager mean, in this cartoon?

The rainbow was on your property, Mr. o’toole, so technically, you are responsible for claiming the gold as personal income.

Source: Cartoon in RD magazine (under the cartoon: luck of the IRS).

Firstly, you'll have to understand the story behind the context.

The man in the green dress is called a leprechaun.

A leprechaun (Irish: leipreachán) is a type of fairy in Irish folklore. They are usually depicted as little bearded men, wearing a coat and hat, who partake in mischief. They are solitary creatures who spend their time making and mending shoes and have a hidden pot of gold at the end of the rainbow

This is the most common of all Leprechaun myths which says that they find gold coins buried in the earth and store them all in a pot which is hidden at the end of a rainbow. Leprechauns are famous for hiding their pot of gold at the end of the rainbow.

This is the story behind the usage of pot of gold.

Now we can look into what the cartoonist tried to convey in this strip.

We see a pot of gold sitting on the table, in front of a leprechaun, who looks distraught. An audit manager has pointed out that this pot of gold was found on the leprechaun's property, which means that he owns this gold. Now, for tax purposes, each individual must declare all his income and only then the amount of tax that he owes the government will be calculated. Since this amount is a percentage of the total income, the tax amount will naturally increase if the total income is higher.

Having known all this, the audit manager is pointing out to the leprechaun that this gold was not accounted as his personal asset and thus, he would be liable to pay more money as tax, than he had actually expected. Also, he will need to pay a fine for falsely declaring his assets and income.

IRS* uses this cartoon to bring about the awareness of proper tax filing. Each individual must file his taxes correctly, by declaring all his properties, assets and incomes.

This also could mean that IRS will find all your assets and you cannot hide anything to evade tax. Even if you bury your assets, they will sniff it out.

"The luck of the Irish" is a popular catchphrase which originally referred to the mining fortunes amassed in the 19th century by several Irish-American entrepreneurs, as if they had stumbled into their wealth by luck and not by brains or hard work.

In the cartoon this is punningly transformed into "The luck of the IRS": The Internal Revenue Service, which collects US Federal taxes.

Note: There is no compelling evidence that this was directly or indirectly published by IRS.