How to pronounce the 'schwa' sound

I have seen lately many questions related to the pronunciation of the schwa (ə) sound. Today, I again found this question, What exactly is the "schwa" sound?, at EL&U, so I wanted to ask how the 'schwa' sound is pronounced.

I believe that schwa (ə) is something a bit mysterious to many ELLs. The number of questions here, at EL&U, and around the web seems to indicate so. If you are learning English as a second language, and your language has no such concept as schwa, I hope my answer may help you a little.

If you look up words in dictionary, soon you will find this "inverted e" character, ə. Then you soon may come to learn that this strange-looking character is called schwa. Then soon, you may get confused because different dictionaries seem to transcribe this schwa sound differently. But more importantly, you usually find that native speakers do not pronounce those words exactly the same way they are written in dictionaries. Or at least, to you, it appears so. For example, from a question on our site:

The news caster pronounces ‘superior’ as /səˈpɪər i ər/. And I can find his pronunciation in the Random House Dictionary. But the other major dictionaries show /suːˈpɪriər/ or /sjuːˈpɪəriə/.

In spoken English, according to linguists and many researchers, when vowel sounds are sorted by number of occurrences, the schwa sound will be at the top of the chart, so it is very important for ELLs to learn how to hear and how to pronounce this schwa sound properly. (You can find an example of results of such researches here.)

My tips for dealing with the schwa sound in listening

Remember that many vowels in English, when being pronounced unstressed, will generally shift toward the center vowel, the schwa (ə).

Knowing which syllables and which words to stress is very important in spoken English. And, because the stress at word level is rather fixed, dictionaries usually transcribe the majority, if not all, of unstressed syllables as schwa (ə). (Actually, there are much more subtle details. For example, most modern dictionaries will also transcribe some of these unstressed syllables as /ɪ/, but that deserves a different question.)

Now you might wonder why I call "schwa" the center vowel.

The answer is because it is THE center vowel. Or, to be more technically precise, schwa is the mid-central vowel. If you look at the IPA chart below, you will see that the schwa sits exactly in the middle of the chart. 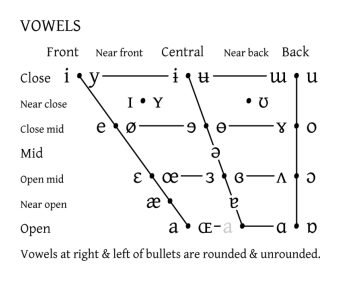 In English, when the sound of any other vowel is reduced to its weak form, the sound will be shifted toward this center sound, the schwa (ə) sound. (There are exceptions such as the short "i" sound (e.g. bit, spit) which is transcribed as /ɪ/ in dictionaries, or other unstressed syllables of what you may think they should be pronounced as /e/ or /i/ (e.g. the second syllable in helipad, or the first syllables believe) which will be pronounced as /ɪ/ rather than the schwa sound by some speakers.)

How to make this 'schwa' sound

I hope that the explanation above can help you to understand why schwa can sound like many sounds: it is exactly because it can be many sounds. You just have to think of schwa as something being reduced toward the center sound.

To make a schwa sound, you just need to reduce the sound of the vowel you think it is supposed to sound like, and reduce it a lot, to the point that it almost loses the quality of the original vowel you at first thought. For example, the first syllable of the word accord has the schwa sound. But many ELLs (including myself, once upon a time) think that it should be pronounced /ack-cord/, and found that when a native speaker says this word, it sounds nothing like /ack-cord/. It shouldn't sound /ack-cord/, of course, because it actually is /ə-kord/. To pronounce words with schwa sounds correctly, just remember to reduce the vowels by shifting them toward the center vowel, as much as you can.

This begs the question: how does this center vowel sound like?

Here is my trick to produce this center vowel.

Then, open your mouth by dropping your jaw just a little, just enough to let your sound come out. Do not move your tongue. Your tongue should rest in your mouth relaxingly. Your tongue does nothing. Make sure that you don't open your mouth too wide, because that's when you say Ah! (the sound that your dentist will ask you to make). Do not force your muscles around your lips. Do not try to form your lips into any shape. Just keep relaxed.

Then, make a sound.

Just remember that your tongue has nothing to do with this sound. It should rest comfortably in your mouth. Do not lift it. Do not protrude it. Do not hold it backward. Do not curl it up. Your jaw also does nothing much. Do not tense it. Do not move it forward or backward. Just drop it gently. Just keep relaxing.

Two sounds in English are commonly identified as schwa, and, as a native English speaker, while I acknowledge that they have similar qualities, I find them different.

The first is the vowel that occurs in most unstressed English syllables, e.g. the first syllable of about. This sound I produce as follows: my lips leave only a small opening, but I'm not using any muscles to constrict that opening (contrast "a" where my lips are more open or "o" where I am using muscles to round my lips a little). My tongue is in its "resting" position; neither raised nor pulled back. Most importantly, I don't make the sound for very long. We could call this the "lazy vowel." The idea is that in unstressed syllables, we do the minimal amount of work to make a vowel! It is extremely important to master this sound when speaking English.

Some speakers have two different sounds that go into unstressed vowels, so that the middle syllable of habitate is not quite this schwa; however, at least in my dialect, there is no distinction. Also, most literate English speakers will, if you ask them to repeat a word slowly, mislead you by accenting all the syllables: "I said "opp-or-tun-it-y" -if they do this, they won't make a schwa in the "or" or "it" syllables, but that is the sound we make when we say the word at a normal pace.

The second sound that is sometimes called schwa is a vowel that occurs in a few words and is not spelled consistently, but usually spelled [oo] or [u], as in hood or put. It always occurs in stressed syllables and never in unstressed syllables. I prefer to analyze this vowel as /ʊ/ and not as schwa, but some call it schwa (there are no minimal pairs distinguishing them, so this is not unreasonable). It is less important that you master this second sound. To make it, I make it similarly to the sound described in the previous paragraph, but the duration is longer, and there is significantly more muscular tension in the lips (they are rounded to roughly the "o" position).

The schwa is two things.

To phonologists, it is a vowel sound between e and a. The tongue is lower than e, but higher than a. This is independent of any connections with the English language.

Dictionaries use one symbol, because they use a phonemic rather than phonetic transcription system, which tries to bridge the differences among the major dialects of English in a single notation.

So if you see the schwa notation, you have to substitute the appropriate sound for your dialect. For instance, the word "water" in the dialects used in England has a more or less pure schwa on the end, whereas in most North American dialects (not all), it becomes rhotic ("a rolling R").

Short answer: Go to this URL: http://www.thefreedictionary.com/bevel Click on the speaker icon. The second vowel in that word is the schwa sound.

If that's not clear, try this one: http://www.thefreedictionary.com/angle The second vowel in that is also a schwa.

If you listen to both, maybe you can hear the similarity in the sound.

Not the answer you're looking for? Browse other questions tagged pronunciation spoken-english vowels phonetics ipa .

5
Can 'superior' alone have the schwa sound?
0
How to pronounce "people"
1
Is "schwa" sound voiced or unvoiced sound?

7
How to interpret pronunciation marks (such as "ləʊðd")
9
The difference between /ɪ/, /i/ , and /ə/
1
How we should pronounce /ɔː/ phonetician in American English?
2
What is the difference between /ʌ/ and /ə/?
2
How to pronounce Celtics?
1
Does google really pronounce a schwa here as it says rather than an "i"?
1
How to pronounce "-ers" ending words (r-colored vowel)
0
can vs can't distinction, and can't followed by a vowel sound