When a cartoon character talks to its creator

I was watching Family Guy where the Griffins were stuck in a traffic jam. Peter looks far ahead to see what's going on and he notices that the road hasn't been drawn yet. He looks up and shouts something like, 'Oh come on what are you doing you guys up there?!' The next scene shows the cartoonist falling sleep on his desk; hearing Peter screaming, he wakes up, apologizes and keeps drawing the rest of the road.

Is there a word or phrase for when a cartoon character talks to its creator?

So far I've found 'breaking the fourth wall', but the problem is I see it refers to the character communicating to the audience, not the people backstage.

The informal word used to describe this sort of thing is "meta".

The cartoon is very meta.

Colloquial meta refers to acts of self-reference in art and literature; it is a simplified form of the jargon used in literary and art criticism. A play within a play can be called metadramatic or meta-theatrical. 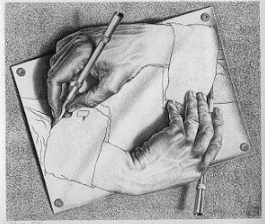 6
How might a native speaker refer to an object when they can't recall its real name?
4
How to describe the sound of the piano when its keys are pressed randomly
3
When a Word Portrays its Meaning
3
How to describe someone who talks too much
2
Is there a word to describe or to refer to a child who talks sweetly?
4
How do you call it in English when the foam loses its volume?
0
What's the word for people who pretend and are disguised as a fictional character?
0
What do you call the furniture behind of which a speaker talks?
1
Terms used for sex and its relevance
2
A movie's negative character