What does it mean by 'bringing him gasping to all fours' in Harry potter?

Immediately, his insides started writhing as though he'd just swallowed live snakes -- doubled up, he wondered whether he was going to be sick -- then a burning sensation spread rapidly form his stomach to the very ends of his fingers and toes -- next, bringing him gasping to all fours, came to a horrible melting feeling, as the skin all over his body bubbled like hot wax -- and before their eyes, his hands began to grow, the fingers thickened, the knuckles were bulging like bolts -- his shoulders stretched painfully and a prickling on his forehead told him that his hair was creeping down toward his eyebrows -- his robes ripped as his chest expanded like a barrel bursting its hoops -- his feet were agony in shoes four sizes too small

Harry potter and the chamber of secrets

It is the description of the feeling of drinking Polyjuice Potion, which makes someone into a different person, from the point of view of Harry Potter turning into Gregory Goyle.

And I don't understand what 'bring him gasping to all fours' means, especially 'four'. Does four here mean number 4?

No, it is not the number four. The expression is all fours (Dictionary.com):

A common, related expression is to be on all fours (Dictionary.com):

In the story, "bringing him gasping to all fours" means he was gasping as he was brought to his hands and knees. Imagine this guy, but gasping and agonizing. 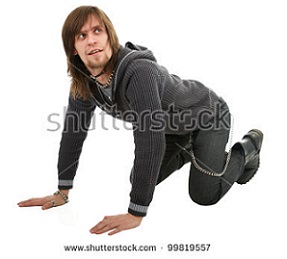 0
what's the meaning of this sentence? why is the butler on all fours