The tunnel wound on and on, going fairly but not quite straight into the side of the hill—The Hill, as all the people for many miles round called it—and many little round doors opened out of it, first on one side and then on another.

As I understand, we can refer to any part of a hill below the top but above the foot of the hill as side of the hill. Another word for this is hillside.

I just started reading a translated version of The Hobbit, the one I got several years ago (around the time the LOTR Trilogy was still in theaters), and to my dismay, one of every two or three sentences was mistranslated one way or another in my opinion. But that is not my question here.

My question is about the term shoulder of the hill.

But maybe I might be wrong. Maybe, to native speakers, "side of the hill" refers to exactly the same part or the same area of a hill as "shoulder of the hill". I am interested in the meaning and usage of both terms in English. (Please do not mind about the translation, I provide it as background information of my curiosity only.)

Do they refer to the same area? Or do they have subtle differences in meaning?

NOAD lists three definitions for shoulder (I've omitted Definition #1, as that is the classic anatomical shoulder):

2 a part of something resembling a shoulder in shape, position, or function : the shoulder of a pulley.
• a point at which a steep slope descends from a plateau or highland area : the shoulder of the hill sloped down.
3 a paved strip alongside a road for stopping on in an emergency.

With those definitions in mind (particularly the subdefinition under Def. 2), it seems like shoulder tells a bit more about the hill than side might; specifically, it implies the top of the hill is relatively flat, with a relatively steep slope downward from the top. Depending on their shapes, some hills might not have shoulders. 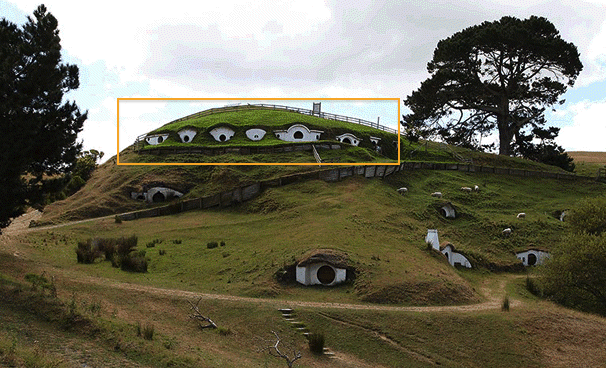 Unless Mr. Baggins lived in one of the lower holes, I wouldn't really call this a "mistranslation" – just a word that is perhaps more detailed than it needs to be.

Not the answer you're looking for? Browse other questions tagged meaning phrase-usage word-meaning or ask your own question.

9
“The same name” vs “a same name”: what's the difference?
3
In the same way / The same way
3
Meaning of the word “may”
2
the meaning of 'shuffle shoulder'
3
Usage of side by side
0
Offside--off whose side?
1
What does 'representation' mean in this context？
3
“Side by side with”
11
What does “I’d sit this one out, Cap,” imply or mean in the context?
0
Meaning of the same side up