Could you please help me identify the subject of the sentence?

"Years of bitter dispute about whether to progress with the eradication led to a poll..."

I'm not sure whether "years" or "dispute" should be subject.

Years of bitter dispute about [whether to progress with the eradication] led to a poll.

Here's a simplified tree diagram of the sentence. The head of the subject NP is "years", and the bracketed whether element above is a subordinate interrogative infinitival clause (embedded question) functioning as complement of "about".

Note that the phrase-level constituents are complements, not modifiers 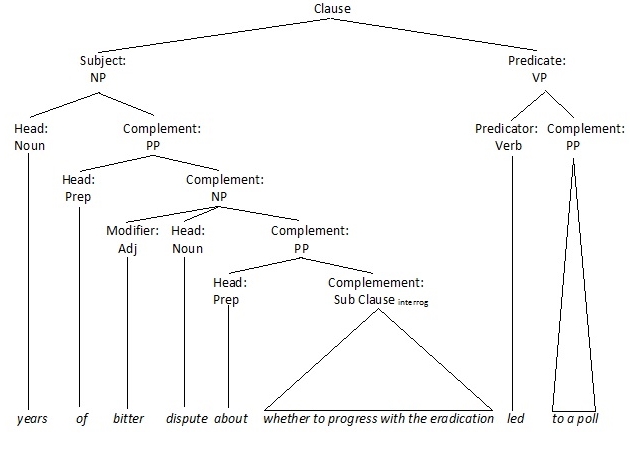 It looks like you're asking about the simple subject, the keyword of the phrase that is the complete subject.

In contrast, "dispute" is the simple object of the preposition "of".

Questions like this one are often related to subject/verb agreement.  In the example sentence, this hardly matters.  Both "years led" and "dispute led" agree.  However, "years do lead" and "dispute does lead" show a difference in agreement, which is reflected in "years of dispute do lead".

As a rule of thumb, you should be able to remove all the modifiers in a subject without removing this keyword: