Direct object vs object of preposition 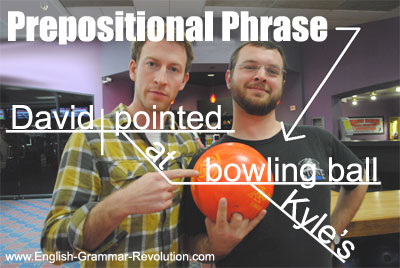 Sorry for asking again. I confuse using direct object with Object of preposition.... For example

I know that is right sentence.

Beause I've thought the bowling ball is receiving the action of the verb;point.

Direct object and object of preposition look like similar to me... Help me...

You can't do this sort of analysis without taking into account the syntactic requirements of the particlar words.

It happens that "point" used in this way* does not take a direct object, but requires an indirect object introduced by "at" or "towards".

"Indicate" has a very similar meaning to "point", but does take a direct object for the destination: "He indicated Kyle's bowling ball [with his finger]".

There is no way to predict this other than learning the requirements of the particular words.

*Note: "point" can take a direct object, but it means the object you are using to point with, rather than the direction of the pointing: "He pointed his finger at her". "Please don't point your gun at me".

So, considering only the sentence without the picture, you cannot express what you mean depending on the sentence, and situation, but just it can mean that the man made the whole shape of the ball sharp, or by using the ball you indicated somewhere.

The verb to point can take a direct object.  However, a ball cannot be easily pointed.

These direct objects have their positions changed.  That's what it means to "receive the action" of the transitive verb to point.

The ball doesn't receive an action in any of these sentences.  It is a target, and it does receive a relationship, and that relationship is the result of an action.  However, that's not the same thing as receiving the action itself.