Could someone explain whether the following sentences have different meanings?

"Lisa used to have long hair when she was a child"

"Lisa had long hair when she was a child"

Depending on the context, they could mean the same thing or two separate things. For starters, "used to" usually implies the imperfect tense in most Romance languages (if that should be what you speak) whereas "had" is usually the simple past in English. "Used to" gives the feeling that Lisa had long hair over a long period of time, perhaps her whole childhood or most of her childhood, whereas "had" in your second example can mean that there was one time or perhaps a few instances during her childhood that Lisa had long hair, but they were few and far between. In French, the imperfect would be used here because, chances are, this wasn't a one-off, that is, a one-time occurrence:

"Elle avait les cheveux longs quand elle était enfant." ("She used to have long hair when she was a child.")

However, in English, depending on the context, "had" can be used as the simple past and imperfect in this situation, but "used to" denotes the imperfectness in English; no contextualization is needed.

The difference between these phrases is that used to is a modal verb and had is only in simple past.

The first phrase uses used to that is a modal verb:

"Lisa used to have long hair when she was a child"

The second phrase only uses had so is in simple past:

"Lisa had long hair when she was a child"

These means that the action was in the past but only for once. 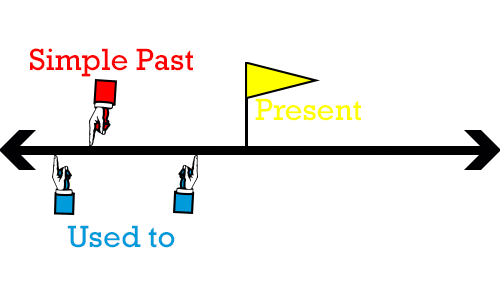 Here I try to explain the difference, in the red hand we have the simple past, which is used to say an action that happend in the past. The blue hands point to two different points of the timeline that is the action happened between these dates.

Not the answer you're looking for? Browse other questions tagged meaning grammar word-meaning or ask your own question.

3
What does this mean - had to cut short the interview
2
How should I interpret this sentence?
2
Meaning of “passed yet”
0
Whst is the difference between “Has” and “Has had”
0
The meaning of these bolded words
0
Use of would had been
0
Whether the continuous tense should be used or not
0
Has seen? Had seen? Had saw? Has saw?