I couldn't find a definition for "bull nose pliers". I've had a look at the results in Google Images and it looks to me that "bull-nose pliers" could be a synonym for "combination pliers" and "Lineman's pliers", but I'm no expert. Wikipedia, however, lists only Lineman's, linesman's (US English), linesman pliers (Canadian English), combination pliers and side-cutting plier for the same type of pliers. Bull nose pliers don't appear on their site at all as a term, and it's hard for me to make out any particular characteristics of this tool to set it apart.

Perhaps the term is regional. I'm in the midwest in the United States, and I have heard the term "bull-nosed pliers," but I've never heard of "combination pliers" or "linesman's pliers" before.

It's not a term I've heard in a while, but as far as I know, bull-nosed pliers are a stubbier version of needle-nosed pliers.

So here's some "regular" pliers – note the adjustable joint and how the jaws sort of make a circle: 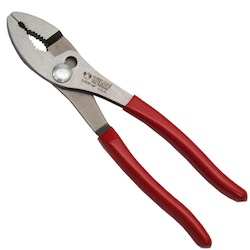 Then here's some bull-nosed pliers – note the lack of adjustable joint and how the jaws touch from top to bottom:

Bull-nosed pliers are contrasted against needle-nosed pliers, which are more long and pointy, and the jaws of which also touch from top to bottom: 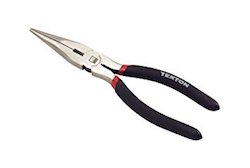 The bottom part of the jaws on bull-nosed and needle-nosed pliers also often comes to a somewhat sharp point on the inside to allow for cutting wires and whatnot. (This is shown in the pictures above, though you may not be able to tell that's what's going on if you haven't seen such a pair of pliers in person before.) But I'm not sure that's a mandatory feature for a pair of pliers to qualify as needle-nosed or bull-nosed. The more distinguishing features are the length of the jaws and the lack of adjustable joint.

I'm looking for a guide to sharpen my bullnose pliers. I know this is old but can add to it. I'm from Ontario, and now live in Alberta, Canada.

I'm an Electrician and pliers are basically almost any double handle, first class levering tool, using for gripping and/or cutting. The various names describe the gross shape and mechanical advantage. As for the photos in the answer by cj750, I'd call them stupid pliers (lol just a joke from personal experience), lineman pliers (Kliens), and needle-nose pliers.

Bullnose pliers (nippers) to me are end cutting pliers. These are similar to side cutters (diagonal cutting pliers) with double cutting edges, but the blades of the bullnose pliers are perpendicular to the handles. There is hardly any depth of cut at all but huge mechanical advantage. We use them for installing stainless steel wire and if you can squeeze hard enough you could cut four 16ga strands at a time.

Not the answer you're looking for? Browse other questions tagged synonyms or ask your own question.