The meaning of 'sobering'

The following is from an article in the New York Times: What Congressmen Are Hiding

It’s sobering to recall that the 1995 law was passed three years after another congressional scandal, in which House members of both parties were censured and prosecuted for abusing accounts with the House bank, in some cases writing checks for tens of thousands of dollars they didn’t have. The same environment of entitlement, secrecy and lax rules led to the current situation.

Some dictionaries define 'sobering' 'making you think about things in a serious way' but after seeing the synonym of 'sobering' as 'depressing, discouraging, daunting, saddening, dispiriting, disheartening' I am not so sure of my understanding.

I feel the definition seem to fit better, but I am not sure because the synonyms, especially 'saddening' or 'disheartening' seems to work in the context as well. The writer is disgusted that politicians made a bad law when they had a chance to make a better one.

I see that some (e.g. Collins Thesaurus of the English Language 3rd Ed.) dictionaries do cite depressing, discouraging, daunting, saddening, dispiriting, disheartening as synonyms of sobering. In my (NNS) opinion, it's only a half of the answer. The proper answer should include two sides of the meaning, as being sober or, moreover, getting sober implies being intoxicated (literally or figuratively) first. So, my choice is disillusioning (a very disillusioning\sobering experience, for example).

Basically it means to think about things in a more serious manner, to pay more attention to it- sort of a wake-up call.

This is not a definition. It's a list of potential synonyms. You can see that it appears in the "thesaurus" part of the page, not the dictionary. 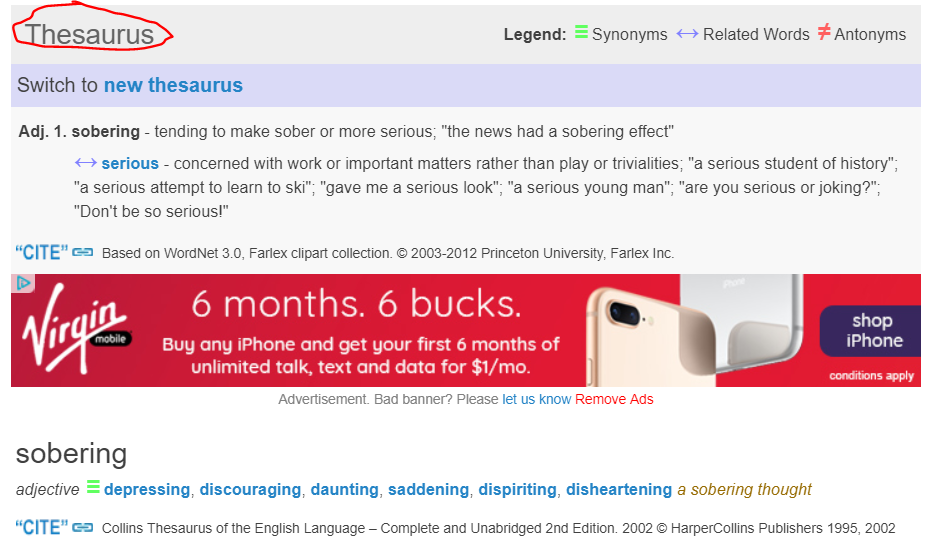 A thesaurus provides synonyms, not definitions. The possible synonyms given by a thesaurus often don't have exactly the same meaning as the key word, and whether they can be used to replace the key word depends on the context where you're using them.

Some idea might be sobering because it is depressing, discouraging, or one of those other descriptions from the thesaurus. That's why they are presented as possible synonyms. Again, it will depend on context which if any of the thesaurus terms might be a valid replacement in a given situation.

Several answers have dictionary definitions provided. I'd like to explain the etymology of the word.

When someone is inebriated their critical thinking is impaired. For most people, this leads them to act in a more carefree way. However, sometimes something can happen which causes the individual to suddenly begin thinking critically, despite the alcohol in their system. Obviously they are not as good at critical thinking as they were when truly sober, but the feeling is sufficiently pronounced such that it feels as though one is "sobered up" by that sudden surprise.

This is, of course, the base principle behind the idea of slapping someone across the face to "sober them up." You are trying to force their mind to begin thinking critically again by making their mind believe they are under attack. This ends this "carefree" feeling.

As used in your quote, the idea is that before you recall the 1995 law, you're pretty carefree. You could live life happily completely unconcerned or unaware that congress has been engaging in such questionable practices. After you recall the law, you can't be so carefree. You have to think very critically about how much you trust our government officials. This effect has a similar feeling as the "sobering up" that occurs when an event forces you to think critically while inebriated, that we use the term as such.

The phrase it is sobering to recall is a collocation whose meaning is not a precise one. The recollection reminds us that we should not feel lighthearted. A certain grimness of outlook is appropriate under the circumstances. Gravity, not levity.

Not the answer you're looking for? Browse other questions tagged meaning-in-context word-meaning or ask your own question.