What is the correct name for the meal for friends or extended family members?

The only word I can think of is "extended family meal" or "friend meals", but since this is a common activity I think there should be a more general word. Most of the time it is home-cooked, and sometimes it's for a special event meaningful only to those people.

In the Vietnamese language we don't have a generic word. We just say "eat at X's home."

As an unrelated information, "family meal" seems like "nuclear family meal" to me, and in restaurant terminology, it means "a group meal that a restaurant serves its staff outside of peak business hours", aka staff meal. 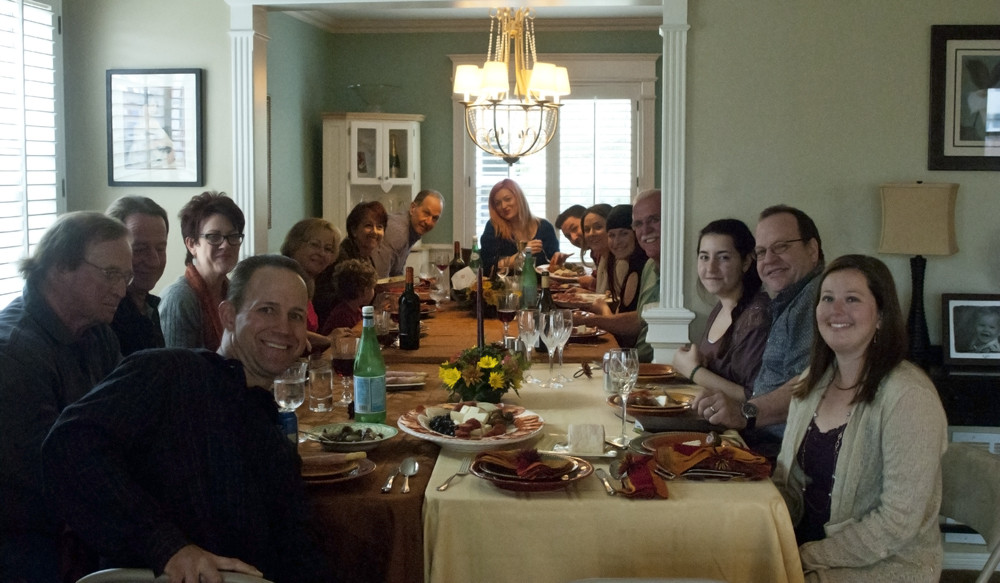 Large gatherings are actually not so common. Normally they would be associated with particular events. Christmas and (in North America) Thanksgiving are two times when extended families have a meal together. You would call this "Christmas Dinner"

There would nearly always be a reason for a gathering. Whether it is Christmas, "Sunday gravy" or in my family "Nan's birthday". In your picture it is Thanksgiving.

One term you might find useful is "Dinner party". This suggests a fairly small number of friends (or extended family members) coming to eat dinner at someone's home in the evening. At a dinner party home-cooked food is normally served. It suggests a certain attempt at sophistication (the host might try to cook something special) and children might not be present. The term "Lunch party" is also possible.

A beautiful dinner party is one of the warmest and most gracious gifts you can give to your friends and family. And a dinner party is — or should be — more than just an assortment of foods and beverages.

An alternative would be to say "Eat at ***'s" For example:

We're eating at the Stephenson's on Monday. We're going round at 6:30, so we'll need a babysitter.

(Stephenson is a family surname)

I'm deliberately omitting Get Together as it's been mentioned in other answers.

Dinner parties were a thing in the U.K. back in the day (1950's onward). They were seen as a means for social climbing, including impressing a boss (maybe an Americanism?).

They tended to have an element of formality (because you can invite people outside of your immediate or extended family it was necessary to have some kind of "extra" formality than normal).

These days, everyone will still understand the term but I don't think it's really associated with social climbing any more. Dinner parties still happen but they are certainly more informal and the "purpose" of the parties has definitely changed - they are much more to do with friends rather than family. A trite example would be hosting a dinner party to introduce two friends as a blind-date.

If you were to host a dinner party in the U.K. for friends and family I don't think anyone would be confused by the idea but it might be seen as an anachronism (everyone would definitely expect you to have big news, like a wedding or a baby for instance).

A Soirée is in layman's terms like a dinner party but with less food, and more booze! They can also just "happen" as they require less of a plan.

We all met up with Julia and ended up going back to her place for a soirée!

The closest term I can think of is "dinner party". This means a meal to which you invite a number of friends and/or family. As the name implies, it's a "party" that is centered around eating "dinner".

A meal for the immediate family is often called "family dinner".

A get-together table might work. Otherwise, I think there's no such word to mean what you wish to say.

P.s. I've looked through various dictionaries, google searches, and even tried translating from my mother-tongue and searching for a Russian equivalent to translate into English.

Not the answer you're looking for? Browse other questions tagged word-request nouns or ask your own question.