How does the word "screaming" modify the verb phrase "come out"?

I cannot see a certain syntactic structure of the sentence:

"The parents come out barefoot and screaming, ready to buy ice-cream."

How does the word "screaming" modify the verb phrase "come out"（right?)? In other words,whether some words(such as "who" and "is" etc.) is omitted,then what is a complete expression of the sentence?

The question nagged me for days, could you people please help me with it?

Here is a simplified tree diagram for your sentence: 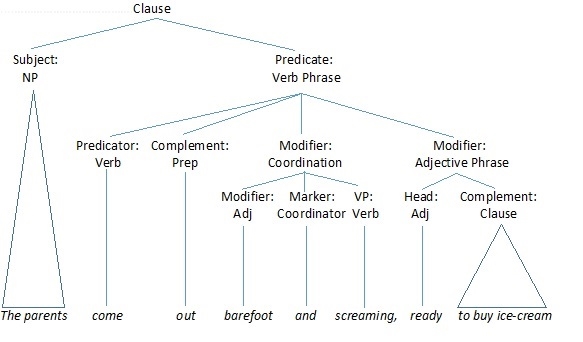 As you will see, there are two major dependents in the verb phrase: the coordination "barefoot and screaming" and the adjective phrase "ready to buy ice-cream". These elements do not modify the subject "the parents", but are optional modifiers in clause structure, i.e. they modify the verb phrase, not the subject noun phrase.

They are, though, predicative in that they refer to a predicand ("the parents"), but they do not actually modify it. And as modifiers in clause structure they are adjuncts, not complements. For this reason they are called 'predicative (depictive) adjuncts' since they give descriptive information about the subject "the parents" (called the predicand), but are modifiers in the verb phrase.

The simple answer is that it doesn't modify the expression "come out".

In other words,whether some words(such as "who" and "is" etc.) is omitted,then what is a complete expression of the sentence?

I get from this that the reason you believe something in the sentence might be modifying the verb 'come' is because you are expecting to see some other word there.

If I try to think as a non-native English speaker I can understand why you might think it isn't a complete sentence - if the words "come out" were not part of the sentence then it would need a verb like "are" in there:

eg "The parents are barefoot and screaming, ready to buy ice cream".

In your original sentence there is no need for the verb 'are' because 'come' is the verb and also determines the present tense.

Had it been in the past tense it could have said:

The parents were coming out....

The parents came out...

But as it is written in the present tense the sentence is complete.

As already mentioned, "screaming" modifies "parents." The sentence is odd because, without context, it describes an odd situation: the parents seem unusually infantile. Furthermore, the sentence without context seems incomplete: the parents came out of what. Finally, the syntax is infrequent. It is not usual in English for adjectives or adjectival phrases modifying the subject to be separated from the subject by a verb (unless the verb is a descriptive verb like some form of "be," "become," or "feel"). Indeed the most frequent position for an adjective is preceding the noun it modifies (again ignoring descriptive verbs).

Adjectival phrases, however, almost always follow the noun modified. "The ready to eat ice cream parents came out" is simply not idiomatic. "The parents, ready to eat ice cream, came out" is idiomatic (ignoring the absence of any mention of whence they emerged). The post-positioning of the adjectival phrase tends to drag adjectives modifying the same noun into a a similar position so that all the modifiers are in the same place.

Adjectives or adjectival phrases modifying the subject may follow the verb, e.g., "The parents were happy and ready to eat ice cream."

Not the answer you're looking for? Browse other questions tagged grammar word-usage sentence-structure .

2
Which word does this modify?
4
If the lava will come down as far as this, we will evacuate these houses
1
How could adjective come after verb in the phrase "spoke nary a word"
0
Order of words in interogative sentences
1
What does the phrase "year-round" modify?
2
What does the phrase 'Getting a haircut' modify?
1
What does the adverb "early" modify?
2
In the structure "verb + adverb of direction (up) + prepositional phrase", Does the adverb "up" modify the verb or the prepositional phrase?
2
How does this participle modify "assumptions"?