What does the sign mean: this sidewalk to be closed on or about 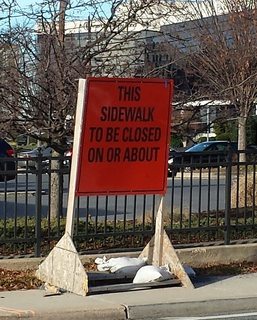 I saw a road sign that said: this sidewalk to be closed on or about. I am not sure what this means.

In normal usage, the phrase "on or about" is followed by a date and has the same meaning as "approximately." If a sign says that a sidewalk will be closed on or about January 5, 2014, I wouldn't be surprised if it were closed anytime between a few days before to a few days after January 5, 2014.

The phrase has a more precise legal definition when used in legal documents.

Not the answer you're looking for? Browse other questions tagged phrases legalese .

2
Some questions about "sign onto carve a canal"
1
What does this phrase mean " follows specific width requirements"?
0
"Exclusions apply.": What does it mean?
0
What does the phrase 'I speak the most Italian' mean and what's its structure?
0
What does "leave work until the last minute" mean?
1
What does "joint predictability capacity" mean?
0
"What was all that about" usage