What's the difference among "extinguish fire", "fight the fire" and "put out fire"

I only know "put out fire" before.
But today I used Google to translate it into Chinese and translated it back into English, it becomes "fight the fire".

Also, I tried translating the most natural Chinese that means "put out fire", I get "extinguishing".

Put out the fire and extinguish the fire mean the same. "Put out" is the everyday expression, "extinguish" more formal or technical.

Fight the fire means try to put out the fire, or maybe sometimes just try to keep it under control. You can fight a fire without ever succeeding in extinguishing it.

"Put out the fire" is the most general and plain expression.

"To extinguish" means to bring to an end. It is more formal, and sounds a bit old fashioned.

As you can see here, "extinguish the fire" used to be much more common in the 19th century, but since 1880, "put out the fire" wins:

I think "extinguish" would likely have left the everyday English vocabulary completely, except that we have these things: 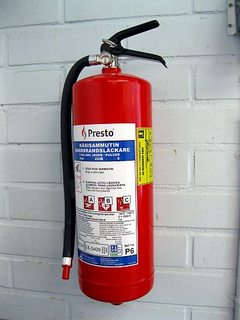 which we call "fire extinguishers". To some degree, "extinguishing a fire" might imply using one of these devices.

You can also "douse a fire" — to extinguish or put out a fire by dumping water on it.

To "fight a fire" is different — it's the process of getting a large blaze under control. Like this: 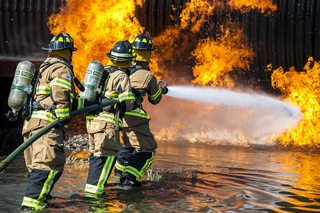 You don't fight the fire from a candle or a cookout — unless something has gone badly wrong.

Not the answer you're looking for? Browse other questions tagged word-choice difference .