Which option is correct

Following is a question from an exercise on active-passive.I am confused between the options because of the clause 'picking up a gun'. Please explain how it should be accounted for in passive voice construction of the sentence.Not sure but somehow I think the answer should be (2) but it is given as (3) in the answer key.I want a detailed explanation.Please. 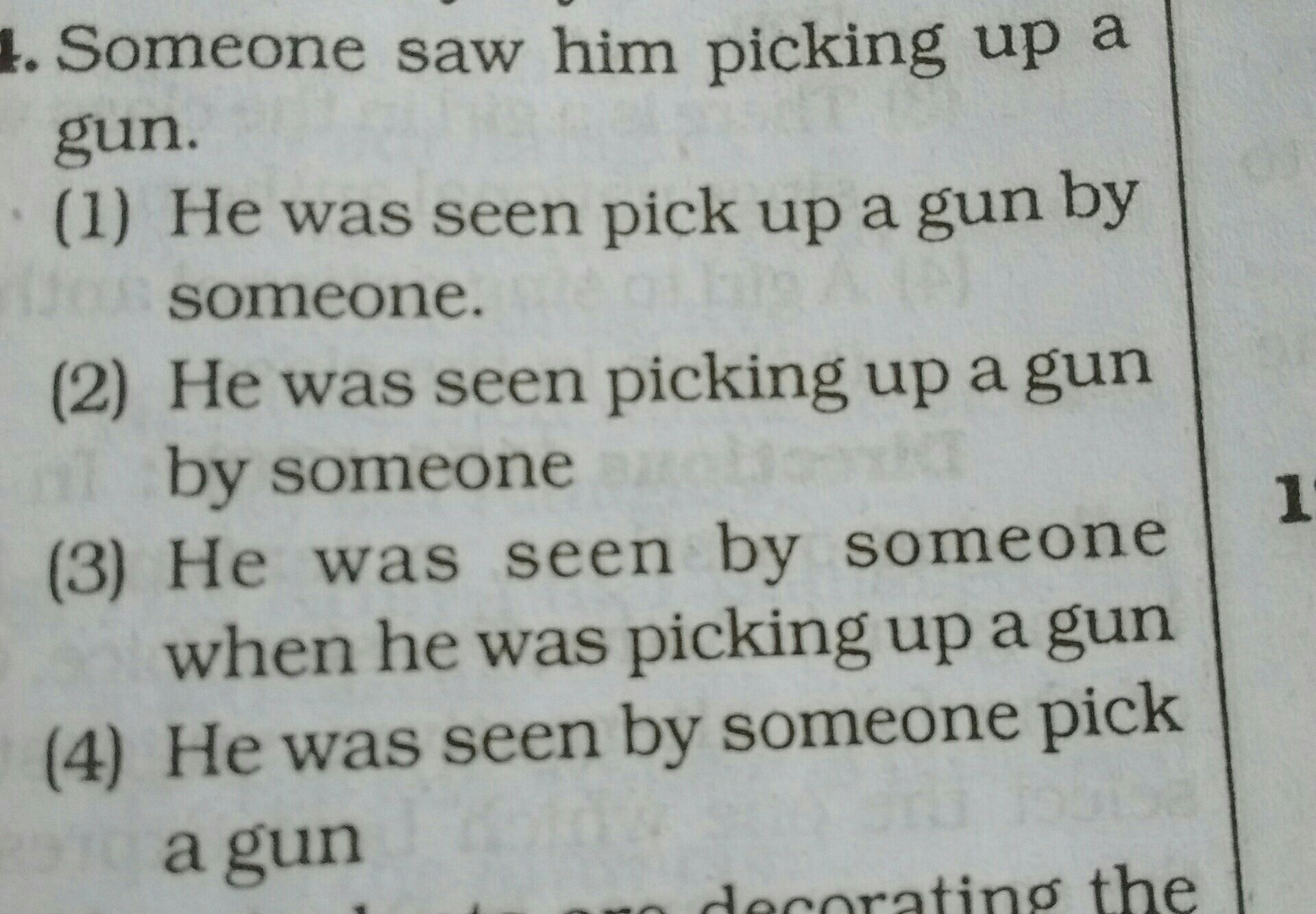 Picking is a gerund. It takes a verb (pick) and represents it in the form of a noun.

We can automatically eliminate (1) and (4) because pick is used a verb and not a noun.

Now we are left with (2) and (3), which, to me, are both acceptable. I must resort to speculation when I say that your book most likely wants you to incorporate the analysis I showed you into your sentences, however long it may make them.

The only problem I can see with using (2) is that by someone could be interpreted as near someone since by does not immediately follow was seen. This may be the reasoning given by your book (if it provides any at all, which I assume it does not).

You can immediately exclude options 1 and 4.

He was definitely seen picking up and not pick up although he could be seen to pick up as an alternative construction.

Most native English speakers would opt for 2, as in:

He was seen picking up a gun by someone sitting in a car.

Number 3 changes the emphasis slightly to stress the time when he was seen, rather than the action:

"He was seen by someone when (at the moment that) he was picking up a gun."

3 is also correct - just laying the emphasis on the time rather than the action.

But I can see no reason why 3 should be preferred to 2.

What you can't say is that:

He was seen by someone picking up a gun as it's ambiguous. In this construction the person who saw him might have been the person picking up the gun.

We can discount #1 and #4 because they use the wrong tense (pick instead of picking).

In the original, what was seen wasn’t “him” per se, it was the action of him picking up the gun. #2 is therefore more accurate on this account than #3 since #2 ties the picking more closely with what was seen. #3 allows the interpretation that the ‘someone’ saw him at the time of the action, but didn’t witness the action itself.

Also, the phrase “by someone” used in the answers is implied by the word “seen” and may be dropped in a passive construction.

Not the answer you're looking for? Browse other questions tagged passive-voice exam-questions or ask your own question.

3
When can/should a subject be omitted in Passive Voice?
1
Is this active or passive voice?
3
Active/passive voice : Let the poor (not be insulted or be not insulted?)
0
Active-passive voice
1
Passive voice of “This surface feels smooth”
1
What kind of sentence it is
1
Exam question: changing from active to passive voice
0
Which choice best expresses “I will keep your secret.” in Passive/Active voice?