Why is it “to your face” instead of “on your face”?

I saw in a movie subtitle.

Let's see if you laugh after five or six shots to your frickin face.

This question had some merit, so I wanted to edit the post but when I checked online, I discovered that the original quote was different. It comes from the movie, Guardians of the Galaxy

Rocket Raccoon: He called me vermin! She called me rodent! Let's see if you can laugh after five or six good shots in your freakin' face!

the "shots" refer to gunshots.

The preposition in is used for anything that enters and remains inside a type of container or receptacle. The protagonist, Rocket Raccoon, threatens to permanently maim or kill Drax the Destroyer. The five or six bullets –after being fired– will be in (inside) Drax's face (head). For this reason alone, the preposition on would be inappropriate.

A person can aim a gun at someone's face but once it is fired, the victim gets a shot in the face. (Google links)

Now comes the interesting bit, Google Books records 9,710 results for shot to the face, not all these shots are from guns, they also include punches...

It ended when Molineaux landed a tremendous shot to the face of Cribb, which sent him down. When the tenth round began, Molineaux actually started to show signs of tiring, but was able to rally and battered Cribb around the ring.

a sharp blow to the head, possibly from an ice-hockey stick...

Blindside you in a scrimmage, cheap shot to the face. Try to get up he knocks you down. Creams you you spear him back, slit open his face, chop him upside the head –– hey, no ref at a camp. No penalties.

and a flying ice hockey puck...

Back then, there were injuries — lots of them — but relatively few received sustained attention. Often the most serious were suffered by goaltenders, for a rather obvious reason. Until about 1960, the player in the net risked his life every time he played. A single, bullet-like slap shot to the face could have been fatal because the goalies of the day didn't wear masks.

Now comes the weird bit, the instances of "shot to the face" disappear after only the second page, there are no more previews after that. I checked several books but I didn't find any more examples. Maybe someone can explain that to us.

Google reveals many instances where shot is used with the preposition to. Oxford Dictionaries explain that the primary meaning of to is 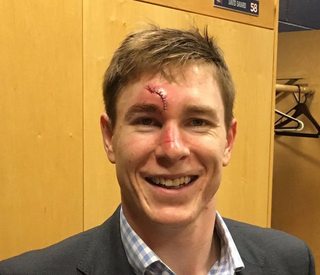 1
Usage of “instead of”
9
On the use of 'Men' in “Why study a man, when you know Men?” - could we use “Man” instead?
0
couldn't vs wouldn't
0
why should it have German values eroded or why should it has German values eroded?
1
Is it wrong to say “I am seeing a film”?
1
When someone is pointing angrily to your face (rudeness)
0
Is it colloquial to say “You like to wear Elsa, don't you?”?
0
Can we use “now” with simple past tense as in “I saw it now”?