I have come across the following question in an exercise book for non-native students of English:

The authors' answer was "must". But l think "might" is the correct answer as it refers to possibility, right? 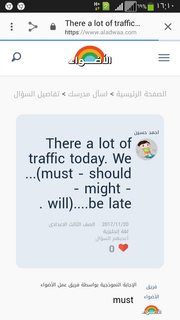 The best answers would be either might be late or will be late, depending on if your being late is a certainty, or merely a possibility. That would depend on several factors: the time, the traffic flow, and how far away you are from your destination.

There is a scenario where must be late could be grammatical, but it’s a little bit contrived. I explained it in an earlier comment:

Imagine that I am dropping you off at the airport. We decide we’ll leave at 6 o'clock in the morning, to avoid rush hour traffic. But when we get onto the highway, the traffic is already moving sluggishly. I might say to you, "There is a lot of traffic already – we must be late.”

In that example, “late” doesn’t mean late to the airport, it means later than we planned on leaving. (I suppose a better way to say it would have been, “There is a lot of traffic – we must have left late.”)

This could be an indicator that your practice software isn’t very trustworthy. Or it could just be an isolated glitch.

Thanks for the valuable contribution above but for clarification, It happened today that this sentence came in my son's English exam. First of all, the context should be clear that it is based on a part of the curriculum taught to grade 9 students in Egypt. In this part, they study the difference between using "might" and "must" in the case of prediction from the known prospective that "might" is used when there is doubt or uncertainty while "must" is used when there is a strong proof that something is going to happen.

Accordingly, the resource used here has tried to contextualize the question mentioning that there is a lot of traffic today as a proof that something is going to happen and it, at the same time, meant not to show any sign of uncertainty or giving a view point in an anticipation such as using I think or doubt, not sure, believe, probably etc. Hence, in his point of view, he is applying the grammatical rule in a perfect sense.

However, the question maker made a mistake that my son who chose "might" and I am not, at all, blaming him, will be the victim for which is that he doesn't have any right sense of the language use and he is dealing with language as Mathematics which is absolutely wrong for the following reasons:

In conclusion, as long as the context is absent the test maker needs to understand that he must be very specific and by all means to compensate for this absence by using crystal clear logic not his own in introducing such ideas. Using any of the certainty or uncertainty means would have solved the mystery putting into considerations that using, these questions, changes our kinds from being humans into being machines that are just applying rules rather than trying to understand them and the way they apply to real life, let alone thinking about reasons.

Sorry for not being able to control myself and be brief but I always feel nervous when I see such questions in high stake exams with the full sense of irresponsibility and indifference of the test maker while I doubt he himself understands such constraints.

The question should read:

“There is a lot of traffic today"

Anyhow, I would choose either "will" or "might" as they are both matters of opinion.

Not a reliable language resource, it seems.

May be late or might be late make sense.

Must implies that the traffic is forcing you to be late.

Not the answer you're looking for? Browse other questions tagged modal-verbs .

2
should + continous infinitive OR should + perfect continous infinitive
1
Perfect Modals [The Usage of Must, Might and Should]
1
Where to use "must/should/might/may/could/shouldn't have "in a sentence?
5
"May (might,can) could have" and "Must should have/should must have" impossible?
0
Couldn't for future impossibility
2
Correct way to answer a question containing "must"
0
Using the modal verb WILL
0
Is this sentence a mixed conditional or not?