Question 1: Riding across the battle field, the famous Bhishm saw a large number of dead warriors.

(A) riding around the battle field

(B) when riding the battle field

(C) while riding across the battle field (Answer given in Book)

I don't see if option C will improve the question. So I think option D should be the answer here. But answer C is given in question paper. Why so?

Question 2: While walking in the park on a quiet summer afternoon a mad dog suddenly attacked him from behind.

I think its also a case of misrelated participle. I rephrase it as: While walking in the park on a quiet summer afternoon, he was attacked by a mad dog from behind. Is this correct?

As to your question #1, I would in fact consider answer 3 an improvement because "X+ing" might also be a gerund, and this remains ambiguous for me until I have read the whole sentence. While reading the very beginning of the sentence, I don't know if it will end in the following way,

"Riding across the battlefield.... was considered dangerous".

So it isn't immediately clear that we are dealing with a subordinate clause. As I'm beginning to read the sentence, a certain sense begins "congealing" in my mind, but then I reach the point where there is a comma and an obvious subject, and this sense breaks down. In some cases (not necessarily in this particular sentence) such a situation might lead to the need to reread the sentence from the very beginning.

So a version where it is immediately clear from the beginning that we are dealing with a subordinate clause is, in fact, preferable.

This is a case where a whole subordinate clause is misrelated because its syntax implies that the subject of the clause "While walking in the park on a quiet summer afternoon" is the dog, and not "he" (whoever the "he" is).

Similarly, your sentence needs to be reworded to say,

While he was walking in the park on a quiet summer afternoon a mad dog suddenly attacked him from behind.

Your rephrasing is also valid because it makes "him" the subject of the main clause, and it coincides with "him" also being the implied subject of the subordinate clause.

As to your Question 2, the participle is certainly misplaced. I would mildly prefer "...attacked from behind..." to your wording which seems to relegate the 'from behind ' to an afterthought when it is an important part of the attack that makes it all the more shocking.

Riding across the battle field, the famous Bhishm saw a large number of dead warriors

Running amok with cans of beer in their hands, the announcers spotted a group a soccer hooligans.

Grammatically, it is possible to take that participle phrase as pertaining to subject or object, announcers or hooligans. We fall back upon semantics to disambiguate.

while riding in your example sentence from the test makes it clearly a subject-oriented phrase.

It's not that we cannot figure out that dead warriors wouldn't be riding. But incongruity avoided is an improvement.

The original text includes a nominative absolute - part of a sentence that describes the subject of the main sentence (in this case, the famous Bhishm).

As the reference explains, this structure can be replaced by a subordinate clause, in this case using the conjunction "while".

As for why this may be considered an improvement: maybe because it is more specific. From a grammatical point of view, the original sentence could be interpreted in other ways - it might mean that the famous Bhishm saw a the dead warriors because he was riding across the battle field. If the intent is to describe the time frame rather than the cause, the addition of "while" removes the ambiguity.

Note that in multiple-choice questions often you have to choose the best answer out of several that may be considered correct. Choosing "no improvement" here denies the possibility that the sentence can be improved as shown above, so it is not the best answer

Unfortunately, you have mistaken the question.

So the right alternative for the phrase in bold is option 3 ; both the bold and option 3 are completely correct. 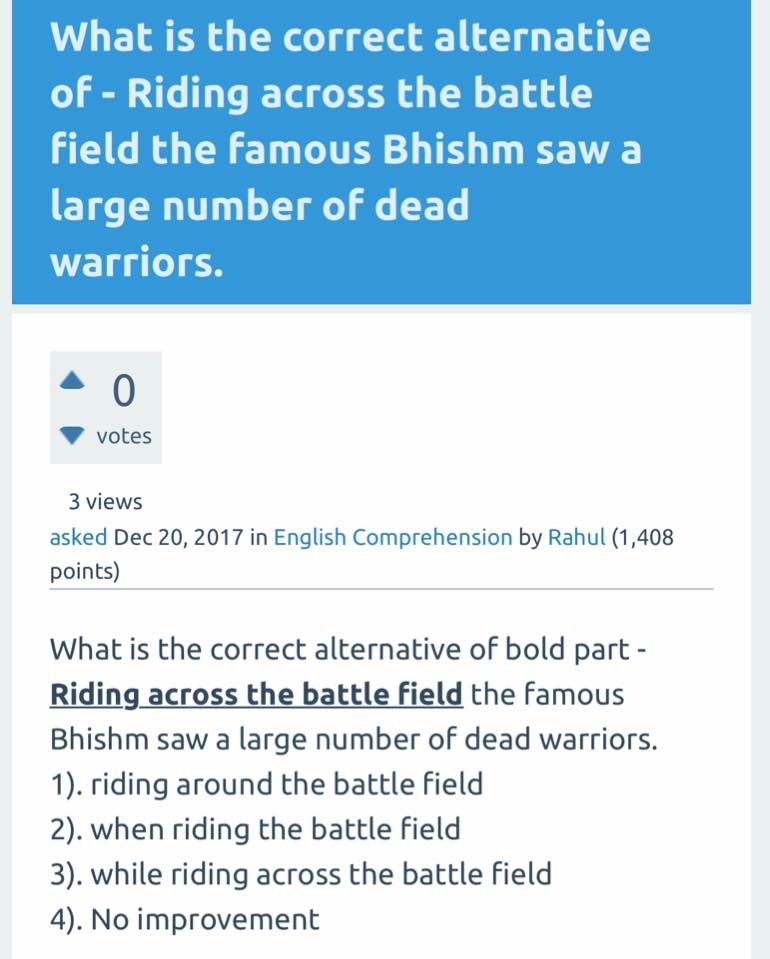 According to grammar rules, when two events are connected, the use of as, when and while is suggested. So the sentence can be improved with the use of while.

Not the answer you're looking for? Browse other questions tagged participles .