if you're finished | passengers waiting for

I have some questions about structures of sentences in pictures below 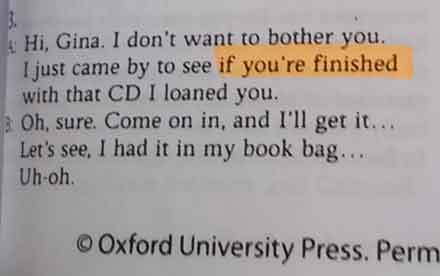 I think finished here is adjective but why don't we use finish simple verb instead? And also in below picture, I don't have any clue about waiting at all !!!

What is the structure will be departing!!!?

On top of Nick's comment, I'll add this. "Finished" is functioning as an adjective here (as Nick says). The structure is analogous to this one:

I came by to see whether you are happy with the CD that I loaned you.

Where happy is an adjective. When you want to use a verb as an adjective, you use the past participle. Further examples:

I came by to see whether you are done [satisfied, irritated, saddened, etc.] with the CD that I loaned you.

Future progressive is used for an activity that is ongoing at some point in the future. Compare these:

I will be studying all evening.
I will be walking for most of the afternoon.
At midnight, I will be sleeping.

with these examples in the future tense:

I will begin studying after dinner.
I will start walking by 2 p.m.
I will go to sleep at 11 p.m.

Your particular example could read your flight will depart at 11:30, too. But use of future progressive suggests that the departure will be ongoing at 11:30, which implies that the process of departing isn't an immediate one.

Whether departure implies a single point in time depends on how you look at it: if the plane is considered to "depart" at the time they shut the doors, that would suggest use of the future tense. If the departure consists of several steps, such as getting the passengers on board, taxiing down the runway, getting clearance, and taking off, that suggests future progressive. Since both are essentially true, you can use either tense.

Not the answer you're looking for? Browse other questions tagged adjectives or ask your own question.

2
Adjective after “to be” verb
1
May I use the word 'vacational' (as opposed to vocational)?
1
Be + past participle
2
Passive vs 'able' adjective
3
Can “drink” and “eat” take object complements?
3
“… more suited.” vs “…more suitable.”
2
ED endings: identifying Adjectives or Verb Past Participles
1
The school is open from 10 A.M to 5 P.M
0
why do we use “of” here, this structure can be repeat after other verbs, but “to be”?