How to describe the following scenario in English without referring to any figure?

Consider the following figures. The figure A shows a front view of a motorcycle parked on an inclined floor using its side stand while the figure B shows a side view of it but using its center stand.

I can make an instruction banner accompanied with those figures as follows. 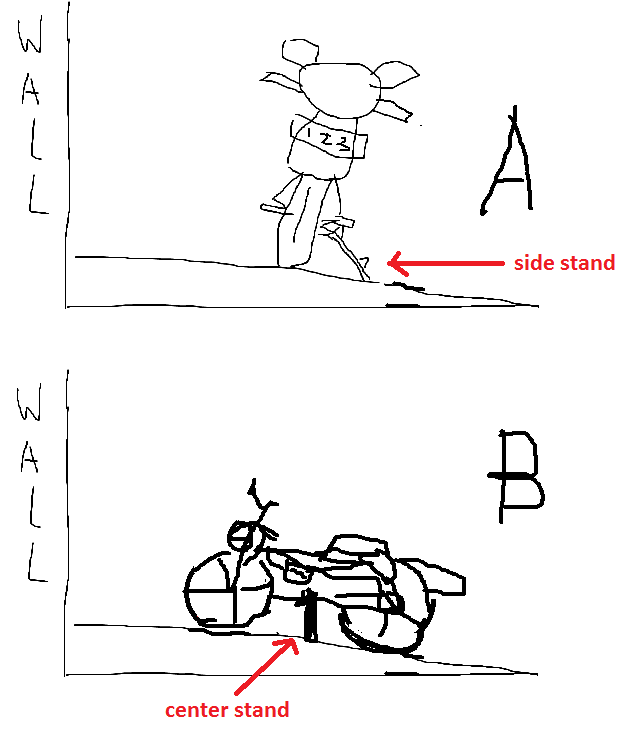 If I don't want to attach the figures to the instruction banner, how do I have to rewrite the instruction in clear and understandable sentences? (As printing figures on the banner take more space and make the cost higher)

Here are the changes I would make:

1) Strike the word "please". I don't think it's appropriate in an instructional context.
2) Change the word "floor" to "surface".
3) When using "incline" as a noun, make sure it doesn't have a "d" (that is, use "incline", not "inclined" – "inclined" is an adjective).
4) Use "Figure B" not "the figure B".
5) I would also bold "side stand" and "center stand," if possible, although that's more of a stylistic choice than an English correction.

Making those changes, we get:

Taking out the references to the figures, I would say:

That all said, I'm a true believer in the adage that "a picture is worth a thousand words." I think the explanation would be clearer if figures were included.

I would clearly identify in your writing what the two stands are (it will help if they have different colors or something easily explainable). Then say something like "if you are parking your motorcycle on a bank, use the [color] side stand", if you are parking it on a ramp, use the [other color] center stand. You will know you have used the correct one when you can let go of your cycle and it stays firmly in place without looking or feeling like it will fall over or roll away".