"He gave the order to abandon ship." - why no article?

The entry for "abandon" in the Oxford Advanced Learner's Dictionary contains the following example sentence:

He gave the order to abandon ship (= to leave the ship because it was sinking).

I wonder why this sentence does not go:

He gave the order to abandon the ship.

So, does this rule in actuality not always apply?

As @Fumblefingers notes, "abandon ship" is akin to a "phrasal verb". While it seems to be a slightly different form of fowl, it's apparently non-standard construction 'makes sense' in the same way that phrasal verbs do.

Importantly "abandon ship" and "abandon the ship", in the manner that they are understood and used in practice, are not directly equivalent, although they are usually (but not always) closely inter-related.

With "Abandon the ship" the focus is on the ship. The people doing the abandoning will often be important in the overall order of things, but to a variable extent. When the decision was made to abandon Shackleton's ship "The Endurance" because it was irrevocably trapped in pack ice and was being slowly destroyed by ice pressure, the decision was to "abandon the ship". despite this being during a period (mid WW1) when the term "abandon ship" was in widespread use, they did NOT "abandon ship" then or at any other time in the sense almost always intended by the term. They were already living on the ice, had removed many of the stores and had already realised that the ship was probably beyond saving.

"Abandon ship!" and "to abandon ship" are focused entirely on the people involved. It (usually) signifies urgent emergency action, often with danger and possible loss of life. The action may have consequences for the ship, and are usually necessitated by events relating to the ship - but "it's not about the ship".

In this Google Ngram chart

SHIFT-click on image for larger version 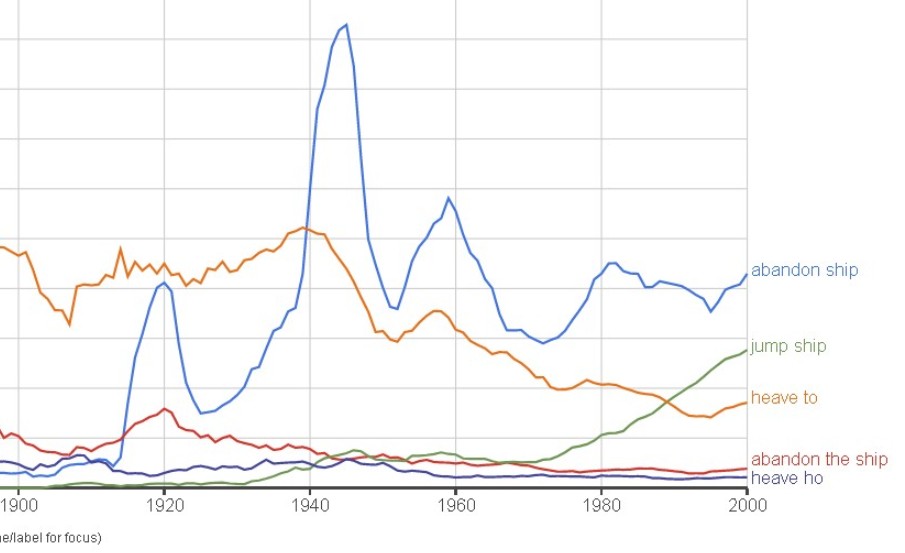 we can see a sudden peak in the term "abandon ship" in the 1914-1918 period (WW1), falling off over the next 5 years or so, then peaking again during the WW2 period, and then continuing at a much higher than WW1 level with several peaks (reason unknown to me).

Conversely "abandon the ship" had a WW1 period peak but has been fading ever since - presumably as the "abandon ship" = people-focus concept gained strength.

The very brief answer is that "abandon ship" is an idiom, a stock phrase. There also seems to be a convention that orders of a military or quasi-military nature tend to be succinct, e.g., "Cease fire" or "About face." If a ship is sinking, an order that is concise is better than one that is grammatical.

Not the answer you're looking for? Browse other questions tagged articles zero-article .