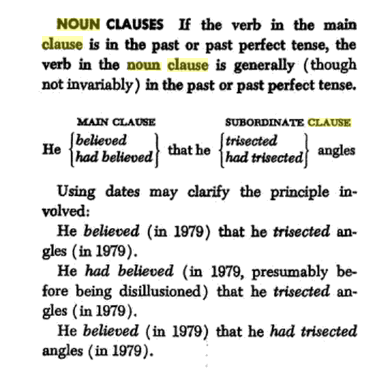 I found these example sentences in the book English Made Simple, Revised Edition: A Complete, Step-by-Step Guide to Better Language Skills

I am not quite sure the meanings of sentence 3 and sentence 4.

He had believed that he trisected angles.

He had believed that he had trisected angles.

Down below are my interpretations:

Sentence 3 means he once believed the fact that "he trisected angles" but manybe didn't believe it afterwards sometime in the past.

Sentence 4 means he believed the fact that he trisected angles, and these things all happened before something(something in the past.)

However, it raised my curiosity the differences between them(the past perfect tense in the noun clause affects the meaning at all?)

Down below are two examples sentences I created

He had stated that he talked to the girl.

He had stated that he had talked to the girl.

What is the difference? So would you all help me understand the concept of the sequence of tenses?

When you use past perfect, you are talking about something that happened before some event in the past. The event must either be clearly identified in the sentence, or provided by the context. The examples that you have quoted do not identify an event, and no context is provided.

If the past perfect is in the second clause, we assume that the event is the specified by the first clause because what happened must precede believing that it happened, so this sentence works:

He believed that he had lost his wallet.

It does not, however, work the other way round:

He had believed that he lost his wallet.

The first clause is before an event, but what event?

He had believed that he lost his wallet at the supermarket until his wife called to tell him that he had left it at home.

He stated that he had talked to the girl

If past perfect is to work in the first clause, another event is required:

He had stated that he talked to the girl but then he changed his story.

He had stated that he had talked to the girl but then he changed his story.

Not the answer you're looking for? Browse other questions tagged tense sequence-of-tenses .