What does “cop on the block” mean?

From the TV series The Universe: 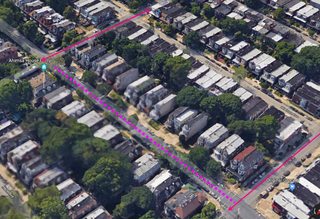 In AmE, "on the block" refers to the row of dwellings between two cross-streets, and the pedestrian walkway in front of those dwellings, if there is one. There is no sense of an "enclosure". That's why we wouldn't say "policeman in the block". However, we could say "The house is located in the 500 ("five-hundred") block of Main Street." When speaking of the block as a bounded section like a container, or as a set of dwellings, then it becomes in the block.

Last week there were three muggings on the 3900 ("thirty-nine-hundred") block of Chestnut Street.

In the past, a cop (a policeman) would be assigned to patrol, on foot, certain blocks which were his "beat".

The "cop on the block" keeps order on the block, and acts as a kind of limit on behavior.

As others have remarked, the analogy with light is very strained.

Yes, your guess is correct. The "cop on the block" is the local policeman who makes sure everyone is law-abiding. In a similar but tenuously metaphorical way, the speed of light is the ultimate "authority" in physics, since nothing can go faster.

It's an odd analogy, but it works for television.

Not the answer you're looking for? Browse other questions tagged word-meaning phrase-meaning or ask your own question.