What is this smoking thing called?

What is this smoking thing called? Is it common in the US? 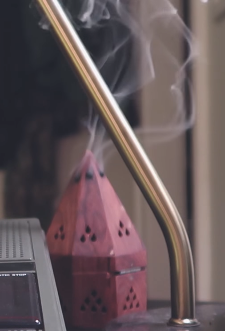 That is an incense burner. A rarer but more specific word is a censer. Incense is a perfume that is burnt or heated to release the scent.

Incense is not traditionally used much in America. Incense is more common in Asian culture, and is also used in some Catholic churches. America has a Western and Protestant culture, so incense would have been rare in the 1950s. It became more common among the "Hippy" culture of the 1960s and is more associated with non-mainstream culture. People would be more likely to burn "joss sticks" than use a censer as in the image.

So not common and not part of mainstream US culture, but not unknown.