How to tell waiting place? 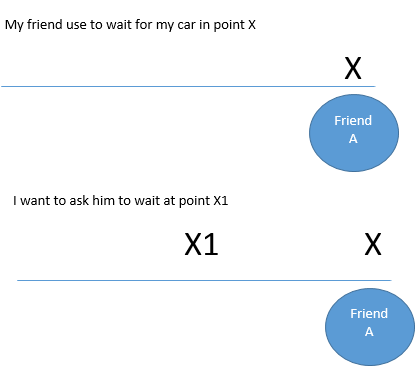 I actually stuck when I want to convey that to my friend and somehow I told “don’t go that far, you can wait little before” But I am not happy with the sentence that used to convey it.

I used "far" in my sentence, but X1 to X is not far just few meters away. And l used "little before", I am unsure of its use in this situation.

How to say it? what is the right sentence?

Your difficulty is because you are looking for "The words that natives use" and there is no fixed expression for this particular situation. Instead you need to explain what you mean as part of a conversation. And that means your friend is playing a role too.

There are no magic words.

Friend: can you pick me up again on Thursday?
You: sure, hey, you know you wait in front of the butcher shop?
F: yeah, what about it?
Y: Well its always difficult to pull in there.
F: You mean because the road is narrow?
Y: yes, and it's close to the corner. So I was thinking, could you walk up 100m.
F: Towards town?
Y: Yes, the road is straight there, it would make things a lot easier.

The point I'm making is that you use all of the shared knowledge and information about the place. This dialogue is only an example. The key point to note is that The speaker explained what they wanted. This means that there was no need to worry if "up" or "down" was correct. Or if "before" or "after". And the friend is able to question and confirm understanding. This is how conversations actually work.

Grammatical accuracy is less important than communication in conversation.

You'd have to put it relative to some other landmarks on the actual street where he needs to be waiting.

E. g. if this is in the middle of a block, and there is a coffeeshop on one corner of this block (to the right of X) and a bank called Super-Duper Bank on the other corner of the block (to the left of X1), tell your friend to stand

just a few meters closer to the Super-Duper bank.

There are phrases like "up the street" and "down the street", and they might refer either to the North-South direction or to which end of the street is considered its "beginning", but in reality, any "up" or "down" will depend on which side you are looking at it from. So you'll need to explain it in terms of how it is relative to some specific known locations. "Between the pharmacy and the Gap store", or something like that.

P. S. If you actually know that your friend will be approaching points X1 and X from the left, you can say "don't go as far as.... [e. g. a pharmacy that is right where X is]". When I give directions, I usually say, "If you have reached X (a pharmacy), you have already gone too far. Go back a few meters."

Not the answer you're looking for? Browse other questions tagged sentence-construction sentence-structure .

2
"How far is it from here? VS "How far is it from here to there?"
0
Is "I'm so happy because I was born in Juni 30" correct?
1
Use of "May I be" for exclamation
1
Use of 'Far' and 'Far away.'
0
How to insert “far” and “more” in a sentence for emphasis?
0
Is the sentence, "When I opened the letter, it was written in Spanish..." grammatically correct?
1
Two meanings of “for somebody to do something”