Meaning of the phrasal verb "splash back up"

I have found it in Crash Course Astronomy, episode 12 (The sentence is at about from 6th minute and 30th second to 7th minute)

Craters are pretty diverse. Some are small and others are huge, dozens kilometers across and more, punctuated with a central peak, a mountain that formed in the middle as material from the gigantic impact that formed it splashed back up in the middle.

I am aware of the all meaning of "splash" but I cannot picture something splashing back up. What is the role of the prepositions "back" and "up" in there?

This site has a wealth of detail about how craters are formed.

For larger transient craters the modifications may take on a dramatic scale. Elastic rebound and collapse cause the excavation trajectories to go into reverse in a way, and the rock masses tend to move upwards and centripetally thus, accompanied by large-scale downfaulting, largely backfilling the transient crater. This will result in the formation of central uplifts and ring systems, and we may now refer to these as central-uplift or central-peak craters, peak-ring craters or multi-ring craters establishing the group of so-called complex impact craters or complex impact structures

Translated into simple terms, when the impactor hits the surface, some of the underlying rock is vaporized, while some of it is melted. This is called the contact and compression phase of the impact.

This molten rock will then be blasted away from the center of the impact. This is called the excavation stage. With smaller impactors, a bowl shaped crater is formed because almost all of the molten rock is ejected from the crater.

If the impactor is large, the excavation is deeper, and the crater will have a larger diameter. The molten rock will hit the outside edge of the crater and rebound, like ripples in a bathtub, towards the center of the impact. When these reflections coalesce in the center, they will create what are called central-uplifts.

Because molten rock is in a liquid-like state, it can 'splash up', creating the central-uplifts in the center of the crater. The image below of the lunar crater Tycho (85 km in diameter) shows such a central uplift. 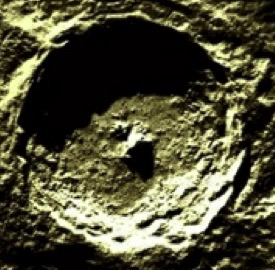