I saw him before he had seen me. 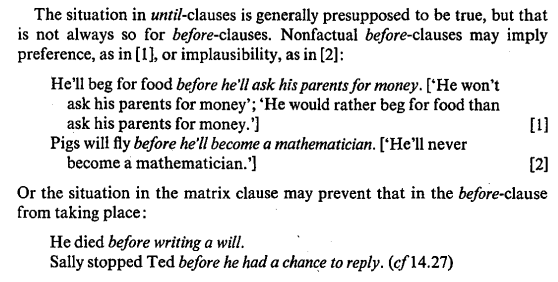 The last example "Sally stopped Ted before he had a change to reply' doesn't use the perfect, so why is it used in 'I saw him before he had seen me"? [13] just looks weird to me - as if perfect places him seeing me before me seeing him and the 'before' clause places me seeing him squarely before him seeing me, which is confusing. Are they both in so-called 'past in the past', like "I told him that I had seen him before he had seen me"? I understand that time is subjective and 'simple' tenses don't have much to do with time at all, but it makes this construction even more confusing to me.

Even Cambridge's Grammar says that that the event expressed in before complement takes place subsequently and has this example:

I don't understand why 'had written' suggests that she had started writing when she left.

The past retrospective is similar in every way to the present retrospective except that instead of the events being before Now, they are before a parti­cular point in Past Time." - Present retrospective is used to 'look back' on things and is deeply rooted to the point Now. Looking at, back, or forward is possible with remote forms, expressing the fact that the speaker views things from a point remote in time.

Does this mean that the speaker uses the 'I saw him' as a point to look back on thing? How does that works when when it's in a before-clause?

I get the meaning of the sentence, but I don't get why it's constructed like that. What am I missing?

Snape had struck before Harry was ready, before he had even begun to summon any force of resistance.

Note: I've read previously-asked questions about similar topics and the answers given didn't provide much clarity on the subject. Maybe I'm just bad at reading.

The difference is that Past Perfect serves a different purpose in the first part of the sentence (I saw him / I had seen him) than in the second (before he saw / had seen me). In the first part, it's used to establish a timeline - the "past in the past" use that most English learners are primarily familiar with - while in the second, it's used to establish the situation as unreal (in a manner similar to the third conditional - cf. "If I had seen him, I would've said hi").

So going through your sentences:

[11] "I saw him before he saw me" and [12] "I had seen him before he saw me" - You did see him, and he did see you. No unreal/hypothetical situation here. Past Perfect is optional, since you don't need it to clarify the timeline - you're already using "before". You can still use it to emphasize that it's important you saw him first, though.

[13] "I saw him before he had seen me" - You did see him, and you stipulate that he would've seen you, but he didn't (eg. because you managed to sneak out first). It's analogous to [11], but since you want to signify that he didn't see you, you dial the Simple Past back to Past Perfect.

[14] "I had seen him before he had seen me" - analogous to [13], but I'd say that in this case you're placing the entire situation in the context of a "past before the past". Eg.

I saw John a week ago, and he asked me if I was at the birthday party. I was, but I had seen him before he had seen me, so I snuck off.

As for the other examples:

Sally stopped Ted before he had a chance to reply.

You don't need Past Perfect here ("had had"), since there's no ambiguity - "stopped" already implies taking away the chance to reply. In a different sentence (eg. "Sally smirked before he had / had had a chance to reply") you might have to use Past Perfect to indicate that one action prevented the other from happening.

She left the country before she wrote / had written her thesis

I wouldn't go as far as to say Past Perfect here implies she began writing. It's really more about Simple Past here meaning that the entire process of writing the thesis to completion happened after she left the country, while Past Perfect means that - at the very least - she hasn't completed writing, and she would have if it wasn't for her leaving the country. It might mean she started writing, or that she was strongly planning to start.

Snape had struck before Harry was ready, before he had even begun to summon any force of resistance.

A literal reading implies that Harry was ready after being struck, but has never begun to summon any force of resistance - but in this case I'd say it's more about gradually putting more emphasis on how much of an interruption Snape striking Harry was.

Not the answer you're looking for? Browse other questions tagged past-perfect perfect-constructions or ask your own question.