Parallelism test question: “By having a budget and (we stuck to it)” 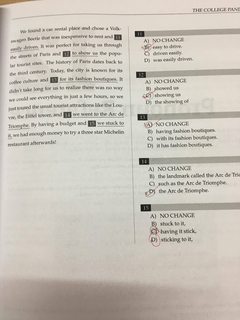 By having a budget and we stuck to it, we had enough money to try a three star Michelin restaurant.

A. NO CHANGE B. stuck to it C. having it stick D. sticking to it

Question number 15 is testing parallelism. So based on the pattern, having + noun, I marked C. It sounds little awkward. However, the correct answer is D. What am I suppose to do with such situations?

In such situations, you are supposed to pick the answer with both the right structure and the right semantics.

Actually, you did pick an answer with the right structure.  "Having a budget" and "having it stick" are both gerund phrases -- but so is "sticking to it".

There is another answer with the right semantics but the wrong structure: "stuck to it".

By doing A and doing B (I'm sure you understand that in order to parallel doing A, what goes here should also be an ing form), we had enough money to try a three-star Michelin restaurant. So, what that leaves us with are only options C and D since only these two begin with words that end in ing.

Now, it's all down to deciding which one of the two makes more sense. I'd say that having it stick makes no sense whatsoever. I'm not even sure what it would mean in this context. Where are you going to stick your budget to? What's that supposed to mean?

The phrase stick to something, on the other hand, is a well-known expression in English which basically means keep doing something and not deviating from the established course or plan. And that's the one you should have picked:

By having a budget and sticking to it (making sure that we didn't go overbudget by keeping spending it carefully), we had enough money to try a three-star Michelin restaurant.

Not the answer you're looking for? Browse other questions tagged exam-questions parallelism or ask your own question.

6
A test question, complete the sentence?
1
May all that is beautiful, meaningful, and brings you joy be yours this Holiday Season. — parallelism?
0
Use of parallelism — when should “of” and “the” be omitted?
1
Test question about washing a shirt
1
Why was “depart from the country” incorrect on this test question?
0
Why “been” is necessary with “caught” when question is testing parallelism?
0
Test question with the word “effect”
3
Logical prediction and parallelism
0
Is it okay to take subject common and maintain parallelism?