What is the name of such a "lamp"?

What is this kind of lamp called? To call it simply a "lamp" doesn't makes sense to me, nor to call it a "chandelier", since I've noticed that "chandelier" refers to an impressive group of lamps which hang from a ceiling. I would like to know what this usual kind of lamp facility is called?

NB honestly I don't know what to call it even in my native language. 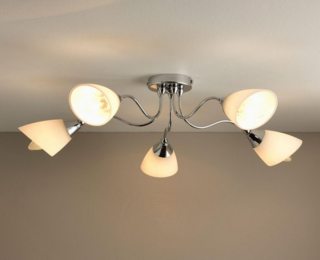 As you noted, "chandelier" does normally refer to larger, more ornate pieces than this, despite its literal meaning of "candle holder".

In general, a light that is fixed is called a "light fitting" or "light fixture" (in contrast to desk lamps, or standing lamps that are pieces of furniture and can be moved). A light fitting could be a "ceiling light", a "wall light" a "floor light". This is a ceiling light.

John Lewis (a department store chain in the UK) describes this particular style as a "multi-armed ceiling light" https://www.johnlewis.com/browse/furniture-lights/ceiling-lighting/multi-armed/_/N-7cq4Z1z0hyhp This one, in particular, is a 5-arm ceiling light

Thus, there is no specific name for this type of light fitting, but they can be described using common words.

A type of lamp which does not hang low from the ceiling is called a semi-flush ceiling light,

Semi-flush is a ceiling light that attaches to the ceiling with a stem or part that creates a gap between the ceiling and the light.

The adjective twisted describes the form of the glass shade

On the other hand, semi-flush ceiling lights or semi-flush mount lights are those that have wider gaps between the fixture and the ceiling. If close to ceiling lights or those that are close to ceiling fixtures emulate the moon or the sun, semi flush lights emulate the classic chandelier. Nevertheless, both types can be made in various designs that can perfectly fit any interior.
[source]

Note that the number of light bulbs is described 3/5/6 or 8 light, thus the ceiling lamp posted on the OP's question is a

The particular word chandelier basically means candle holder, but for most people evokes as you say a large, ornate fixture.

That may change, but in the meantime I stick with the more generic light fitting for any lamp holder, and I'd have said multiple light fitting, but it does appear the industry has settled on multi(-)arm(ed) to describe these things.

I wish we could resurrect manifold¹ [as the adjective] for this, it’s the perfect word — it means something has multiple parts, and often refers to something with a branching structure, such as an exhaust manifold².

¹ a pipe fitting with several lateral outlets for connecting one pipe with others; especially : a fitting on an internal combustion engine that directs a fuel and air mixture to or receives the exhaust gases from several cylinders

In AmE, and no doubt elsewhere too, the terminology for lighting fixtures is quite varied and specific to the industry. Not every style has a widely used generic name, or fits neatly into a category.

Phrases that would come in handy for you trying to describe this image to a company over the phone, if you were shopping for such a light, say:

It's not a pendant style ceiling lamp; that is, it doesn't hang down from the ceiling on chains. Rather it has five rod-like but undulating polished metal arms each of which terminates in a frosted sconce.

While all the suggested terms are accurate and accepted, it is perfectly fine these days to call any multi-armed ceiling lamp a chandelier, no matter how fancy or plain. To say otherwise is wordy and overly specific. The main difference is between lay speakers and professionals. A designer or lamp manufacturer would refer to such a lamp generally as a fixture because all built-in lighting is referred to as a fixture. They would want to distinguish it from a more formal chandelier, which might have additional hanging pieces like strings of crystals that might may need space accommodation and expense. Watching the remodeling shows on cable TV, any multi-armed lighting fixture can be and is often referred to as a chandelier by professionals and lay people alike.

I think that the most generic way to refer to this type of ceiling light fixture would be a simple-style 5-light chandelier or a simple-fashion living-room chandelier. At least, that's what most online furniture stores call it (simple-style chandelier). Although it might not sound like it, it is still a chandelier, any way you slice it. Just a more modern version of it, I guess.

Not the answer you're looking for? Browse other questions tagged terminology image-identification .