What does “unplugged” mean or imply in this headline?

What does "unplugged" mean or imply in the headline 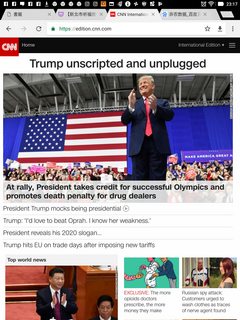 For many years, musicians gave concerts before very large audiences, where their electric guitars and other instruments were plugged into amplifiers.

An alternative to such large (and often choreographed and scripted) concerts is the intimate setting, where so-called "acoustic" (not electronically amplified) instruments are used. The audience is smaller, and the performer is not as distant from the audience; the performers are not up on a high stage.

In more intimate settings, people are more likely to reveal things in an impromptu manner, things that they might not reveal when in front of a huge audience.

So the headline "Trump unscripted and unplugged" is an allusion to the sort of performer-audience relationship when the setting is more intimate, and personal revelations from the performer are more likely.

It is a figurative headline -- Trump still has a microphone -- but he feels himself to be in an intimate setting. It seems he's not on a high dais, merely on a soapbox of some kind.

The adjective unplugged means that you're not going to use any electrical or electronic devices during whatever it is that you're doing. And since they're talking about Trump appearing at the event unscripted, which means that he has not been preparing for this even using a script written for him beforehand by professional speechwriters, my guess would be that unplugged here probably refers to the fact that he is also not going to be using something called a teleprompter—a type of display device that prompts the person speaking with an electronic visual text of a speech or script. American Presidents are known to use them all the time for reading their speeches during their press conferences. Here's a picture of one: 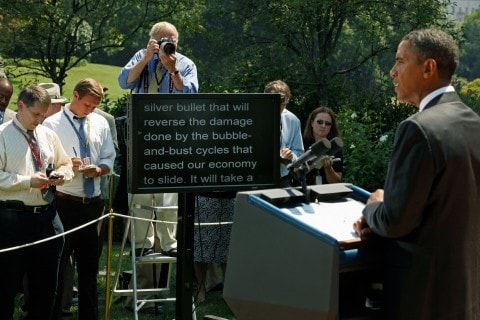 Again, the idea here is that he's going to appear at the even without any kind of preparation done beforehand which will help make the session more informal in its format.

Not the answer you're looking for? Browse other questions tagged meaning headlinese or ask your own question.

0
Why is “too” used in this negative sentence?