What does "the Trump suit for the hand" mean?

The dealer continues distributing the cards until each player has a total of six cards. The dealer then removes the bottom card from the remainder of the deck and places it face-up in the center of the table to designate the Trump suit for the hand.

What does "...for the hand" in last sentence mean?

In this case, when the dealer turns up the bottom card, it designates ‘trump’ for the current round of play - that is, it “designates trump for the hand”.

One round of play - one hand - is what you appear to be calling one "game cycle". For example, a game of Cribbage lasts until one player scores 121 points, but a hand of Cribbage is one deal of cards to each player, plus the subsequent play, until the next deal.

A hand is the set of cards that a player receives in a particular round of a card game. It's called a hand because of the simple fact that you literally have to hold the cards in your hand. Here's a picture of a typical hand: 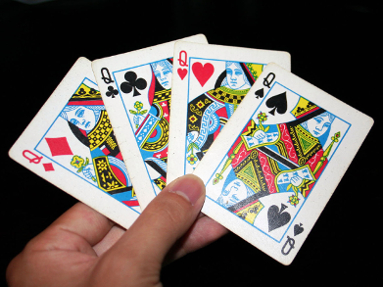 In a standard deck of playing cards, there are four suits: diamonds, clubs, hearts and spades. And the trump suit is a suit that has been chosen to have the highest value in a particular round of the game (or for the duration of the entire game, depending on the game being played). In other words, with cards of the trump suit, you will be able to beat any other card of the non-trump suit. If both cards are trump-suit cards, the one with the higher rank wins.

So, the phrase the trump suit for the hand means that one of the four suits has been designated to rank above all others for that particular round of the game.

Trump suit, by the way, is where we get the expression trump card from. For example:

I have a feeling the prosecution still hasn't played their trump card in this trial—I expect a big revelation during tomorrow's testimony.

A standard deck of cards has four "suits"; these being Hearts, Clubs, Spades and Diamonds.

In some card games (Bridge is a good example), one of these suits will be designated the "trump" suit. (Some other games may have a specific "trump card"; you asked about suits, but the concept is the same either way).

There are a number of idiomatic uses of the word "trump" derived from this which are used generally in other contexts.

There are various usages depending on the specific game, and regional variations. for instance, some refer to a hand as a single instance of play in a game where each player contributes one card to the middle, then one player takes those cards (hearts, euchre, rook, etc). However these are "tricks", not hands - just be aware that the term "hand" is sometimes misused.

In your case, the card placed face up represents Trump until the point in the game where the cards are collected and re-dealt to players.

This doesn't mean the gameplay ends. Some games tally points at the end of each hand and deal another hand, continuing play until another goal is met.

In the game Bridge, a hand is what you play after shuffling and dealing all the cards. Whatever suit the highest bid is, that suit becomes the "trump suit for the hand". Until that hand is over, cards of the trump suit beat cards of any other suit. (A hand also means the cards that one player receives, but that's not the meaning here; here, it's the entire deal.)