Adverbial Adjunct vs Object of Preposition

I am analyzing this sentence:

"Carlos wrote a letter to his uncle."

So far I have:

But I wasn't sure about "to his uncle"

Is it an adverbial adjunct or object of preposition?

Carlos wrote a letter to his uncle.

Your analysis so far is correct.

But the preposition phrase to his uncle is neither an adjunct nor an object, but a complement of the verb "wrote". The preposition "to" makes a contribution to identifying the semantic role of the noun phrase "his uncle" (called the oblique) who is clearly the recipient. But the PP is not itself an object.

Adjuncts on the other hand are modifiers that are associated with a wide range of semantic roles including location, manner, duration, condition and so on. But they do not occur as PPs with an oblique that marks the recipient of a direct object.

Here's a simplified tree diagram of your sentence: 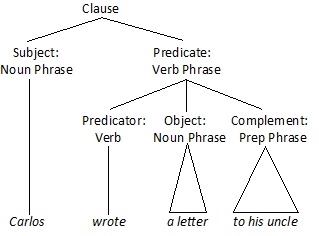 This modifier might be an adjunct of the predicator, or it might be a modifier of the direct object.  That's a negligible difference in this clause, but it becomes noticeable if we cast the clause in the passive voice:

To answer your questions:

I know that I am two years late, but I just googled this "issue" and found this post. I could find a similar example my English professor made, thus I do think that there are many ways of analyzing the same exact sentence.

My prof. wrote the following sentence: John read a story to the children - and the parsing is like this: S - V - Direct Object - Prepositional Object.

I don't have the guts to call neither your sentence nor that of my professor to be wrong.

Not the answer you're looking for? Browse other questions tagged grammar sentence-structure .

7
"Some things are better left unsaid." -- What are the grammatical functions of 'better', 'left' and 'unsaid'?
1
"Judge in so delicate and subtle a matter"
0
Analysis of "Wendell is here today"; in particular the phrase "here today"
1
Can indirect objects start with a preposition?
1
Position of direct object
1
whose object are "you"?
0
Noun clause or adverbial clause?
1
Participle clause after subordinate clause (adverbial clause with its own participle clause)