meaning of the phrase "bat clean-up"?

I have happened upon it in Crash Course A&P. It is at around 41 second. Here it goes:

But much of your chemical waste still needs to be sorted and disposed of, so one system steps in to bat clean-up. And that is your urinary system.

I understand what the speaker mean from the context, but why is there no article before the word clean-up and used the word bat?

When the host says steps in to bat cleanup, a little anthropomorphic cartoon kidney in a Chicago Cubs hat appears holding a baseball bat. This makes it clear that the phrase is a reference to baseball jargon. 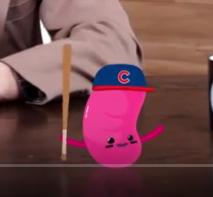 (At the time the video was published, the Cubs were in the playoffs of Major League Baseball.)

The batting order or batting lineup in baseball is the literally the order in which the team playing offense lines up to bat. You can say you are batting first, batting second, and so forth, and by metaphor, when you bat (or take your at-bat) you are taking a turn attempting something. The MW definition includes

intransitive verb 1b : to take one's turn at bat

There is no article before cleanup as it is not the object of the verb bat, but an adverbial modifier indicating the order of the bat. The fourth position is nicknamed the cleanup hitter, or the player batting cleanup; it came to be known as such because a good hit in this position would "clean up" the bases of any runners who went before, giving the offense a good chance to score, and so strategically the hitter should be a powerful one. If you take the host's mention of the liver, lungs, and colon as three steps in waste processing, you can even say the urinary system comes fourth in the video, although those systems do not work sequentially in real life.