Can any time on clock be spoken as it is in numbers only (hour + minutes)?

According to the Cambridge dictionary, the answer for “What time is it?” depends on the minutes.

When the times outside five-minute intervals, we say minutes past or minutes to:

Otherwise, we can say directly what we see on the watch / clock, it says to read it simply. For example:

9.15 quarter past nine or nine fifteen

9.20 twenty past nine or nine twenty

Can we say times out loud by the actual numbers that are on the watch / clock and maybe these Cambridge rules are only in the UK? According to what I remember, many times when I asked people about the time, they didn't follow those rules. They would say: 10:13 = Ten thirteen. 8:21 = eight twenty one etc. If that is correct, then what about 10:11, 10:10, 9:11 — if I simply read them as they are (Ten eleven), it works?

Admittedly, I'm answering a BrE question as an American, but your source is suspect.

This is grammatical, but nobody in their right mind would actually say it. Who's got the time to calculate 60 minus 36 to come up with this version? You'd just say "Nine thirty-six". (If the time is close to a round value, it's perfectly normal to say it's "twenty to one" or "a quarter to three")

In the days of analog clocks, people would normally give the time to the nearest 5 minutes.

Now when the most likely way to find the time is to look at your phone, you'll mostly just read off exactly what it says, whether it's "ten fifteen" or "seven twenty-seven". When the minutes are less than 10, you'll add an "oh", as in "six oh five".

In spoken English, you can always state the time as the hour and minutes (aside from the top of the hour), and you would only state minutes if you need to be explicit or if you are deliberately drawing attention to the time for rhetorical effect.

I have never encountered any difference conversationally whether the number of minutes is a multiple of five or not in North America, but perhaps that is a transatlantic difference.

Specifically in Scotland, especially west central, e.g. Glasgow, the phrase “the back of” is used to refer to a fuzzy period of time just after the hour, but no later than 15 minutes past. (For reasons unknown, even to myself, I tend to interpret it as anything from 4 minutes past, to 13 minutes past, with the sweet spot being about 8 minutes past.) Example:

[It’s just after seven o’clock in the evening. A couple of friends, Dick and Harry, are waiting “under the clock” in Glasgow Central train station for a third, Tam, to arrive. Dick an American, is a stickler for punctuality. Harry is an Englishman, but one who has been in Scotland for a while and so understands the locals. Tam was born, bred, and still lives in Queens Park, at the heart of Glasgow’s South Side.]

Harry: Calm down, he said he’d be here and he will. And it’s Tam, not Tom.

Dick: But we agreed to meet here just after seven, and ... look, seven-oh-three now. Late!

Harry: It wasn’t “just after” seven. We agreed to meet at the back of seven.

Harry: It’s too hard to explain, and it makes no sense anyway, but trust me, he’ll be here in roughly...[looks up at the train station’s venerable clock]...four minutes.

[Exit all, Tam trying to decide if they should visit Murphy’s Pakora bar first, prior to the main event, while Harry reassures Dick that Tam has merely expressed a desire for a curry, and is not planning to assassinate one of Glasgow’s many esteemed residents descended of the wonderful sub-continent whence such marvelous food originated.]

Yes, it works. Looking at your phone, or a clock, it is perfectly reasonable to say the hour followed by the exact number of minutes. All the way from 10:01 ("ten oh one") to 10:59 ("ten fifty-nine"). For numbers of minutes less than 10 you normally add in the zero (usually said as "oh"). An alternative would be to say "one past ten", "two past ten" and so on.

It can be considered normal to round a little bit, so instead of saying 10:29 you might say "ten thirty". An exception would be if you are asked:

Them: When does the train arrive?

In this case rounding may give a false impression of the time that the train or bus is due.

However if someone asked you:

Them: When did you eat lunch today?

You: Oh, at one thirteen

That would sound silly (too precise). For less precise timings I would be saying something like:

You: Quarter past one

Disclaimer: I am Australian, rules may vary by country.

Today we just say the time since we tend to use digital clocks. The cited rules from the Cambridge dictionary are more historical, likely owing to how analog clocks are read differently than increasingly common digital clocks.

As noted in the comments, the transition from analog to digital clock faces hasn't been completed, and many folks still see analog clocks as the norm. This likely varies with culture and within cultures by generation and setting. It's likely that the choice of wording also varies along the same lines as a consequence.

The style of expression given in the Cambridge guide has been going out-of-fashion, though is still retained by some speakers. This appears to be a technology thing.

In olden days, clocks used to look like this: 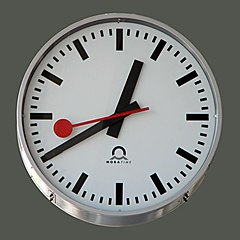 When you're looking at a clock like that, it makes more sense to regard minutes until the next hour.

But, as time goes on, digital clocks are becoming more prevalent:

Given this display, it's kinda weird to restate the time in terms of the distance until the next hour.

So, today, it's increasingly common to just read the time.

Time-telling precision has changed, too

Historically, it didn't make sense to give the exact minute for two big reasons:

Given these factors, it didn't make much sense for folks to work to distinguish the exact time.

Today, digital clock faces provide the exact minute without any additional effort on the viewer's part, and many digital clocks, e.g. those on computers and cell phones, auto-update their time to a central time authority. This means that it's now easy and meaningful to specify a minute, causing a reduced interest in approximation rules.

Regardless of formal grammar, actual speech is a lot more casual.

If the minutes are less than 30, I'd say the numbers:

If the minutes are more than 30, what I'd say depends on the context. If we're asking because of a deadline, I'll subtract from the next hour:

If it's just to know the time, I'd keep it simple:

I think you are simply misunderstanding what the source means. It's not saying that it's wrong to say "ten-eleven"; it's perfectly fine to say any time as [hour]-[minutes] whether or not it is a multiple of five minutes.

What the source is trying to say is that when the time is not at a multiple of five minutes, if we want to express the time relative to the hour, we say "minutes past" or "minutes to" as opposed to merely saying "past" or "to".

So for 10:11 you have the following options (in British English)

"ten-eleven" or "eleven minutes past ten",

whereas for 10:10 you would say either

Whether you express the time of 08:45 as 'eight forty-five', or 'quarter to nine', both expressions are unambiguous.

Yes. Those Cambridge rules reflect an old manner of speaking, and they were never required. I would even describe those rules as outdated. Time is rarely spoken that way in America anymore.

I grew up with analog clocks and watches. Back then, it was normal to say "ten 'til nine", "ten of nine", or "ten minutes of nine" to indicate 8:50. Fifteen-minute intervals would be "quarter", as in "quarter of nine" for 8:45 or "quarter past nine" for 9:15. Thirty-minute intervals were designated as "half".

With digital clocks on walls, computers, and cell phones, almost everyone just reads the time numerically now. When the time is 8:50, most people simply say "eight fifty". Leading zeroes are only verbalized for minutes. For example, 8:08 is spoken as "eight oh eight"---no one says "oh eight oh eight".

Mostly, you will hear older speakers using the Cambridge style.

You can definitely say it in figures. From that major literary work Quadrophenia

Inside outside, where have I been?
Out of my brain on the five fifteen

Not the answer you're looking for? Browse other questions tagged british-english spoken-english time reading-aloud or ask your own question.

0
Should I put an article before “half” when talking about time?

3
May I use “when” with a time expression like “10 minutes back”?
4
He {speaks/has spoken} German since a long time
9
Can we say “I'll be there one hour later” instead of “I'll be there in an hour”?
2
What word to use here? To check the time/clock after short intervals of minutes /seconds?
1
How to say something that will happen at X minutes every hour?
0
Any time and Any day in english
15
Can “do somebody” mean “imitate somebody” in spoken English?
0
Times of the day - usage