What do we call lips squeezing back?

To my mind, to pout means to push one's lips forward, as an expression of petulant annoyance or sexual attraction. To pucker one's lips has a similar meaning.

I am wondering what the opposite expression is called, namely pulling one's lips back. I am not sure scrunch would do, as it signifies the crumbling and squeezing of face.

Here's an image example of such a facial expression from a movie. 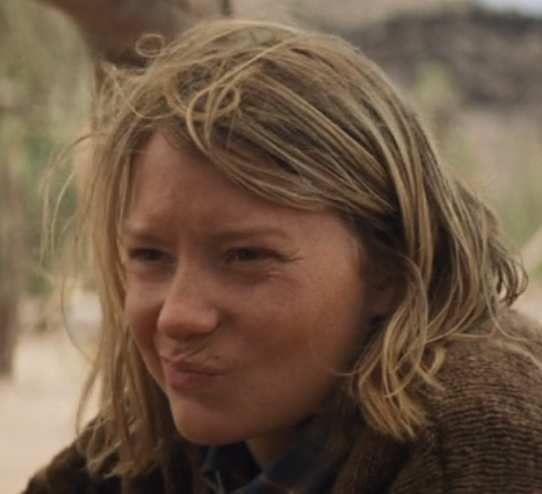 My first thought is "pursing" lips, e.g. "She pursed her lips when she heard me fart."

Pursed comes from an old-fashioned money purse that closes by a drawstring. It wrinkles the top of the purse, so pursed means "wrinkled" as in the picture you show.

She screwed up her lips.

She screwed up her mouth.

Her lips drew back (in a smirk/disbelief).

All of these work in your described context. To screw up one's lips especially can depict a facial expression where the lips are pulled and twisted to one side of the face. Think of a scene where a person twists their lips aside to exhale smoke in order to not puff in their conversation partner's face. There are examples in novels of this common scene:

“Can I sit in front?” Lux asked, screwing her mouth up to exhale to one side, politely away from us. (Source: The Virgin Suicides by Jeffrey Eugenides)

If I am not mistaken, the screenshot is from the movie Tracks. Incidentally, I found an audio-described copy of the film and it actually uses screw up one's lips in this scene. As far as the actual scene from the movie is concerned, I don't think it's a smirk or skepticism that she is displaying (as another answer suggests).

Sallay to Robyn: If you're out there on your own and a wild bull's coming at ya, you shoot it. Don't think. You shoot. You understand?

(She screws up her lips.)

I'd describe the woman in the photo as having an expression of skepticism or disbelief. In that light, I'd suggest one of the following phrases:

A skeptical smirk came across her face.

The corner of her mouth quirked up into a disbelieving smirk.

She gave a skeptical half-smile.

She shot him a disbelieving look.

I found the following link useful as a reference for describing facial expressions:

0
What is this action called: a kid protrudes his lips and makes a sound like a mouse?