Is there a shorter name for “chest of drawers”?

I have a furniture (as in the picture below) that based on Wikipedia is called in English "chest of drawers", but it seems to me too long name for such furniture. Is there a shorter name for that in the UK (not in north America) or people really call it "chest of drawers" when they refer to it in everyday life?

Second, why not to call it "drawers chest", it sounds simpler and shorter apparently and also grammatically correct. Isn't it? 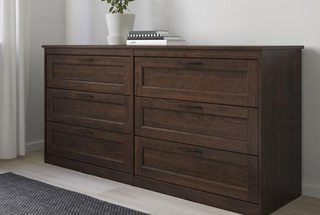 "Chest of drawers" is its name. It is quite a long name for a common item, but that is what it is called. It has been around for a long time, the expression has been in use since 1670 (etymonline)

Similar items include "tallboy" (a tall chest with drawers in a column), A dresser (usually a bit more than just a chest of drawers, with a top part for display). A bureau (a combination of drawers and a writing desk). But there is no word that means exactly the same as "chest of drawers".

In many situations you don't need the full name.

Put your socks in the drawer!

There are similar examples of other things named this way when the item is a "container" of some sort.

A pack of cards (not a cards pack). A bunch of flowers (not a flowers bunch). A bottle of beer ((when talking about the beer, but beer bottle is also fine when refering to the bottle).

(ngrams searches for card pack and pack of cards "Card pack tends to refer to specialised packs "The game contains an 8 sided die and a card pack showing countries of the world..."

And remember all the collective nouns:

A herd of cows. A flock of sheep. A pride of Lions etc.

In British English I would call that object a Sideboard, if I wasn't using the simpler Chest of Drawers.

A flat-topped piece of furniture with cupboards and drawers, used for storing crockery, glasses, and table linen.

This is a link to the page of a popular British furniture retailer, Harveys for such items.

It could also be referred to as a cabinet. Per the Oxford dictionary, that is "a cupboard with shelves or drawers for storing or displaying articles."

Dresser should be a good enough word for that. Merriam Webster lists one of the definitions of "dresser" as:

3: a chest of drawers or bureau with a mirror

Conventionally, it is a chest of drawers with a mirror on the top, but colloquially if you look at furniture stores etc., it is common to call the ones without mirrors as 'dressers' as well.