Can “expertises” as a plural form be used?

I've seen here that there is no plural of expertise, so what should I do in the following sentence?

To put into context, we have a multidisciplinary consortium with partners of different "expertise" (or maybe skills is a better word)

Stated more generally, can a "mass noun" be a subject? If yes, can I put the verb in plural to show that it is used as a plural?

From your answers, it looks like I should completely reformulate my sentence. Should I really avoid this?

You could say you employ people within different areas of expertise, or people with varying skill sets.

Your example phrase lacks a bit of context, but I could imagine it flowing somewhere around these lines, including the notion of expert(ise) and skill sets in one sentence:

When you decide to hire the services of our experts, their wide variety of skill sets is complementary.

Here's my recommendation: Use expertises. Don't be confused by what you've read in that thread.

You've managed to come up with a sentence where expertise needs to be pluralized. You are talking about two or more distinct kinds of expertise that complement each other.

I have no problem with:

In order to perform well in this job, the manager needs expertise in management, programming, scheduling, and testing. These different expertises are complementary.

If you're not bold enough to pluralize expertise, you can get around the problem by saying:

In order to perform well in this job, the manager needs expertise in management, programming, scheduling, and testing. These different kinds of expertise are complementary.

Some times ago, there was a similar debate on ELU about the plural of equipment. In that case, the debate got rather heated, because the user didn't provide any legitimate example construct where equipments might be a better word.

As one extra note to those who remain unconvinced, who stand ready to click the downvote button: Ignore those red squiggly lines from your spell-checker! There is ample precedent. Read on:

Often in putting together a new combination they lack specific expertises, and in the pressure of competition they do not have time to develop them in-house.
(from the book The Nature of Technology: What It Is and How It Evolves, by W. Brian Arthur, 2009)

These four expertises – that of the educator, the political orator, the judge, and the general – oversee aspects of that moral life itself, which the statesman regulates overall.
(from the book Reason and Emotion: Essays on Ancient Moral Psychology and Ethical Theory by John Madison Cooper, 1999)

There is even one book – ironically entitled Rethinking Expertise – that begins by defining a "Periodic Table of Expertises": 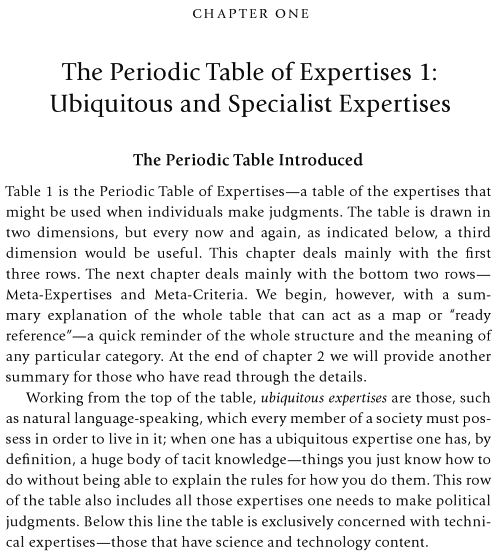 You are right. The word expertise is a mass noun.

Services by experts from different areas/fields/domains are complementary.

If you want to use expertise anyhow:

The service from the expertise from different domains is complementary.

Not the answer you're looking for? Browse other questions tagged plural-forms uncountable-nouns or ask your own question.