When answering someone what does a company take? Whose/which/what?

I just had conversation with my friend and got stuck in answering.

Is that correct? Since the question was asked with apostrophe, I had to answer with 'whose.'

Are 'which and what' also possible? Though I don't think so!

When we want to make a possessive using a pronoun followed by the adverb else, we normally put the possessive 'S' after the whole noun phrase:

However, it used to be more common to use a genitive pronoun and put the word else afterwards:

Although this is rare now, it is still seen occasionally, even in print.

This was remarked upon by the famous grammarian of English, Otto Jespersen. Here is an excerpt from one of his works (A Modern English Grammar on Historical Principles, Vol 6 1940-49): 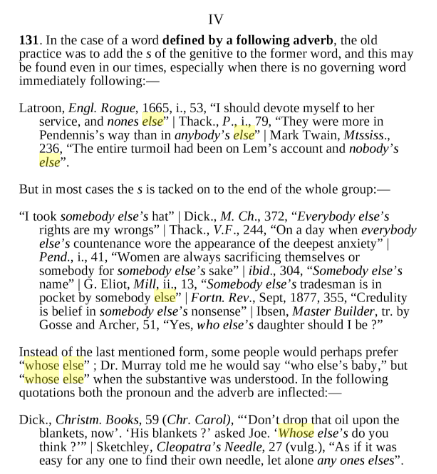 Not the answer you're looking for? Browse other questions tagged pronouns or ask your own question.

3
What does it refer to or what role does it take?
4
What role does this it take?
4
Why does Richard Stallman refer to random strangers with feminine pronouns?
1
what does *when* refer to in the following sentence?
1
Which is correct: “gallery for which” or “gallery for whose” or both?
3
Difference between “do it yourself” and “do it on your own”
1
Is “But, I later realized, have no car” grammatical?
0
“My”, “him” etc. as subject
0
Does “anyone” mean “any random person”?
1
“I don't think there's someone home.” vs “I don't think there's anyone home.”