Is “The way we are learning English is not good” a clause?

Can I call the following a clause?

The way we are learning English is not good.

Here, what kind of clause is "The way we are learning English"

I think it's a noun clause because it sits before the auxiliary "is" here. Am I right? If I am correct what is "The way" in that clause?

It is a noun phrase, and the subject of the sentence. It is not a clause, but it contains one.

The word "is" is the main verb (not an auxiliary) and "not good" is an adjective and the complement of the subject. 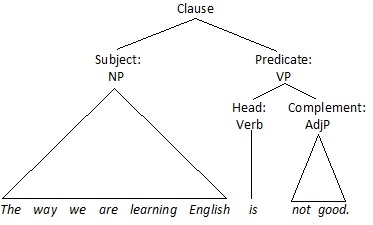 Here is a simplified tree of the OP's sentence, which clearly shows that syntactically the complement "not good" belongs in the predicate VP, not the subject NP. The complement is required to complete the verb phrase and hence is complement of the verb.

Not the answer you're looking for? Browse other questions tagged relative-clauses clauses complements noun-phrases or ask your own question.

1
It's a good thing - talking about future or opinion
2
“It was an admission that all might not be right between them.” - that-clause as subject.. or not?
0
Should I use “including” for a list?
0
What kind of clause is this
1
Shortening a clause after the the word “other”
0
Doubt in the reduction of relative clause statement
0
Why not “most of whom are children” but “most of them children” on BBC texts?
2
Why is an infinitival clause called a clause even if it has no subject?
0
The Questions which are easy to understand” vs “The easy-to-understand questions”