"Prepositional verbs have two parts: a verb and a preposition which cannot be separated from each other."

If they cannot be separated, does it mean that we can't put a verb's preposition at the beginning?

At what are you looking?

After whom are you looking?

From what did you prevent me?

Of what are you accusing me?

Do you believe these questions are correct?

In my opinion, they are incorrect because they seem weird as well as breaking the definition of Cambridge about prepositional verbs, because they are separated in those questions.

So I will be happy to see your thoughts.

You're confusing prepositions and "prepositional verbs". 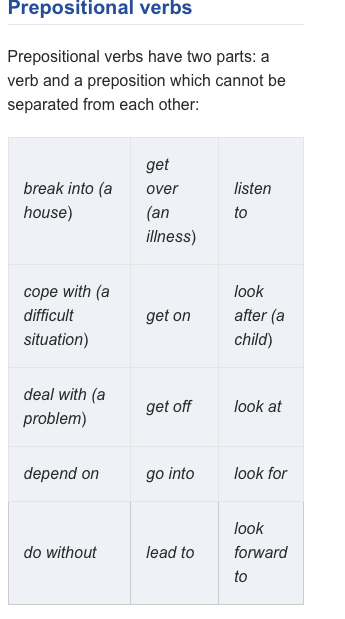 In these sentences, they are prepositions and the verbs are clearly separated and so are not prepositional verbs.

If this is so, what are 1-4? The prepositions in 1-4 are not “prepositional phrases”. In 1-4 there is no direct object. The verb and preposition are always separate. The preposition’s object in 1-4 is the what-phrase. 1-4 is more formal.

If we reworded the above so that the preposition shifts to the clause-final position, it would make the below questions more casual and “informal” according to register.

He looked at her.

In the above sentence, there are certain tests to determine whether it is a prepositional verb by seeing if the preposition at and the verb can be separated and still maintain the same meaning:

✗ *He at her looked

Why is the above wrong? There is a certain rule with pronouns discussed later.

and we know it is a transitive-prepositional verb because if we removed the direct object the sentence wouldn’t make sense:

You can construct sentences where “look at” is not a prepositional verb such as example 5 and 6.

Again “look after” can again be a “prepositional verb” depending on the syntatic structure of the sentence. Compare this sentence with example 6.

The preposition (or particle) cannot be moved or separated in intransitive-prepositional verbs:

✓ We broke up two years ago

✗ We broke two years ago up

With transitive-prepositional verbs it is different:

If the direct object is a noun, you can say:

✓ They pulled down [the house]

✓ They pulled [the house] down

If the object is a pronoun (such as it, him, her, them) , then the object always comes between the verb and the particle (adverb/preposition etc.):

✗ They pulled down [it].

✗ At her he looked.

✗ Looking after three children all day it's hard work

✓ Looking after three children all day is hard work

To illustrate consider the difference in semantics between:

They pulled down the house.

They pulled the house down.

With the first being a transitive-prepositional verb "pulled down", but in the second it is also a transitive-prepositional verb with the object in between the verb and the particle - notice, how even though the second is more direct, we know its meaning does not stray far from that conveyed in the first. In fact we could almost interpret both sentences as almost equivalent in meaning. We should not however ignore its syntactic difference. With "pulled down" being a prepositional verb "phrase" and and in the second, the particle being separated from the verb. Remember the term 'phrase' is flexible, brave cat can be a noun phrase and so can nouns e.g. Mary. Mary's part of speech is always categorically a noun but can function as a noun phrase in clauses/sentences.

Yes -> If the preposition and verb can be reordered to fit in between the object; then it is likely to be a transitive prepositional phrase. There are exceptions in re-ordering if the direct object is a noun or a pronoun.

No -> It is likely an intransitive prepositional verb

There are further tests to see whether a phrase is a prepositional verb or not IF they are grammatically syntactically similar:

literal - you can understand the meaning of the words on a surface level with no nuance and each word is clear as to its role or function - it is likely not a prepositional verb.

idiomatic - if 2 or more words convey an enhanced layer of meaning beyond the literal meaning of each word - it is likely to be a prepositional verb.

In normal English these sentences would become:

What are you looking at?

Who are you looking after?

What did you prevent me from?

What are you accusing me of?

Your use of 'whom' in the second sentence is grammatically correct, but the distinction between 'who' and 'whom' is, unfortunately , declining, so in common usage 'who' is used exclusively.

Not the answer you're looking for? Browse other questions tagged grammar verbs phrasal-verbs prepositional-phrases wh-questions or ask your own question.

0
facilitated in 2007 the reconciliation — is that grammatically fine?
4
Can you <run them by me> now
0
“Approach to” and “going to”
4
Prepositional complement (two - part question)
0
Verbs with two objects
0
Questions about “as .. as”
1
A teacher said to use “I don't need that” instead of “I won't be needing that” because there is no “continuous in modal verbs”
2
“I done [past verb]” or “I done [present verb]” grammar
0
Which one are you after? What are you after?
9
Is it correct to say you are talking “to Skype”?