I have always thought the noun "paint" is uncountable when referring to color/colored liquid/solid pigment. But the above sentence uses it as a count noun in this sense. I thought it is only countable when meaning different paint tubes.

The Macmillan Dictionary seems to confirm my guess, suggesting that "paint" is only a count noun in the meaning a set of small blocks or tubes containing paint of different colors that you use for making pictures. Can "paint" be countable when used in the sense of "color" or "pigment"? What is the difference between "paint" as a mass noun and as a count noun?

Many “uncountable” nouns can be used in a "countable form" when they refer to a broader meaning. The notion that using an s to pluralize an uncountable noun must be an error is a trap.

Words like waters, rices, sands, and oxygens are valid plural forms, although some of them are quite rare because you would only use them in unusual contexts. For example, a scientific textbook reads:

I’m reminded of a debate that raged over at ELU some years ago about the plural of equipment. The accepted answer was downvoted and drew more than 30 comments and has since been deleted; it read:

Equipment can be both singular and plural. The word equipments is wrong/ungrammatical, though its use is prevalent.

Fact is, the use of equipments is uncommon, not prevalent, and it’s not necessarily wrong or ungrammatical in those usages.

You’ve uncovered an excellent example with the word paints. Most of the time, paint can be used to even when referring to a plural. For example, if I go to the store and buy a gallon of yellow paint and a gallon of red paint, I would probably say:

But there is nothing wrong with me saying:

There are many paints at the paint store.

I think what you say about Macmillan is on the right track, but off just a little bit:

The Macmillan Dictionary seems to confirm my guess, suggesting that "paint" is only a count noun in the meaning a set of small blocks or tubes containing paint of different colors that you use for making pictures. [emphasis added]

I think the word “only” is misplaced there; I think a better way to phrase it would be:

The Macmillan Dictionary seems to confirm my guess, suggesting that "paint" is a count noun in contexts such as a set of small blocks or tubes containing paint of different colors that you use for making pictures.

It isn’t practical for a dictionary to list every sense of how a word can be used; the best dictionaries can do is provide a suite of general examples.

Your original sentence could probably be written either way; I would consider both grammatically correct:

However, the array of paint on a Pollock canvas is so widely varied, from an art perspective, it almost seems a shame to use the singular. 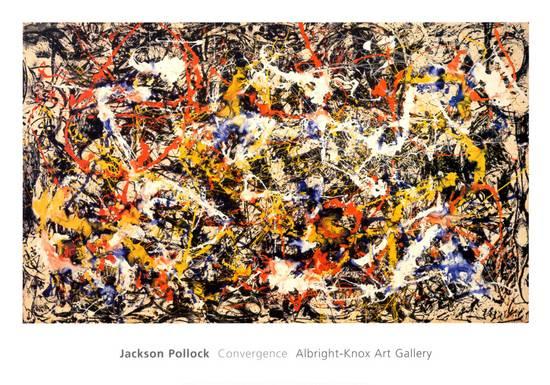 You're correct. This is a rather unconventional use of paints which is intended to suggest the set of small tubes of paint that the dictionary mentions. The basic meaning is Jackson Pollock dropped different colors of paint on canvas seemingly at random. The use of paints suggests the source of the different colors, as well as the fact that he used different colors. If the sentence used paint instead of paints it would include the meaning of using a single bucket of paint.