Milton's it (in green) feels ambiguous and bungled. He ought to have rewritten the referent, as I would've never deduced it without McWhorter's clarification beneath.

Yet Milton would've known not to use a pronoun, as he was canny enough to predict if this ambiguity would daze his readers. 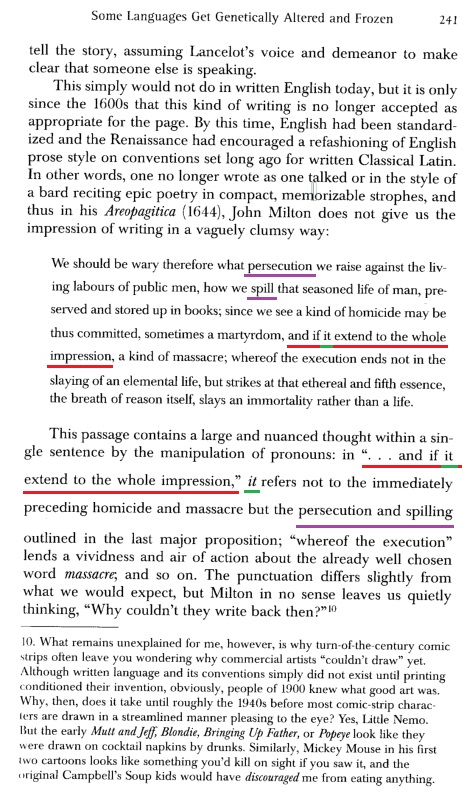 The pronoun it does not seem "bungled" to me at all. It is a little distant from its referent, true, and the reference is not to a simple noun but to a composition of noun phrases; but if you're following the argument there's no difficulty at all.

I would have liked to see and slays or slaying.

They could write just fine back then, dude.

As to why you're bewildered: ideas must be your terra firma, not individual words. Just as which can refer back to the idea expressed in a prior clause, so can it.

Even if you find the antecedent to be unclear at first glance, the referent is impossible to miss.  What persecution, how we spill, this kind of homicide or martyrdom or even massacre -- all of these are characterizations of some single underlying class of action.  They all share a referent.

There is an obvious difference between "persecution" and "homicide".  The two words here do not represent their shared referent in the same way.  As presented, not all persecution entails homicide and even less entails massacre, but some may, which is reason enough to be wary.  In those cases, the massacre is an escalation of a martyrdom which itself is an escalation of a homicide that in turn began as mere persecution.

All of that hardly matters.  We can assume that Milton was canny enough to know when all roads lead to Rome.  It makes little practical difference exactly how far back the reader reaches to find the antecedent.  The semantics of the sentence as a whole remain intact.

There is no blunder here, and little if any cause for bewilderment.  Even if a technical ambiguity exists, it doesn't stand as a meaningful ambiguity.  Those antecedents that make any kind of sense all make pretty much the same kind of sense.

Not the answer you're looking for? Browse other questions tagged ambiguity or ask your own question.